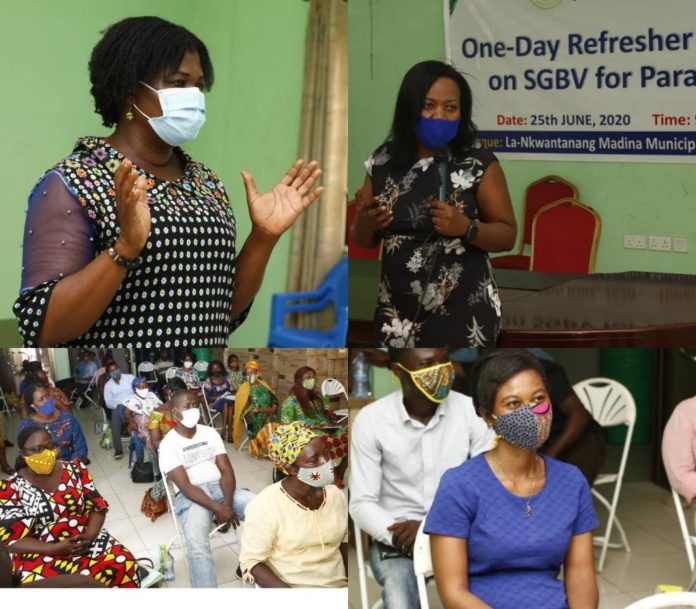 To reduce the recurrence of Sexual and Gender Based Violence (SGBV) acts, the Ministry of Gender, Children and Social Protection (MoGCSP) and the UNFPA on Thursday organised a day’s refresher training programme for paralegals.

The 35 paralegals, made up of opinion leaders of the Madina market and surrounding communities, are expected among many duties to educate traders and other people on domestic and sexual violence and the sanctions that come with it.

They are also to help victims to consult the right channels with their problems to get the requisite legal, psychological and social support.

Madam Afua Addotey Aboagye, a lawyer with the International Federation of Women Lawyers, Ghana (FIDA-Ghana), said it was unlawful to maltreat house helps and deny them access to basic education, especially as basic education was free in Ghana

She also cautioned against verbal abuse either towards a house help, biological or adopted child or spouse, as that could cause them a psychological trauma and totally disable them from striving to attain their dream.

On rape and defilement, Madam Aboagye said: “Men, please be careful when it comes to rape issues because it can cost you as much as 25 years imprisonment. If you are about to start a romantic move, or if you have already started and your partner says, ‘stop’, control yourself and stop the act, if not you could be charged for rape.

“Also when you engage any girl who is less than 16 years in a romantic act, whether with her consent of not, you can be charged with defilement, because that child is underage according to the law,” she said.

Madam Malonin Asibi, the Director of Domestic Violence Secretariat, MoGCSP, said the Ministry has established an office in the Madina market and was putting up another at the Agbogbloshie market to support people in that regard.

She said many times people hesitate to approach the police for redress whenever they fell victims to such violent acts, however, she believed they would be more comfortable seeking help from people they already know.

The Ministry was working with legal team, Department of Social Welfare, and the Domestic Violence and Victim Support Unit (DOVVSU) of the Ghana Police Service to help the paralegals to administer their duties, she said.

Madam Asibi said some of the markets recorded illegal activities that infringed on the rights of others, hence the preparedness of the Ministry to replicate the project in other parts of the country.

Superintendent of Police Sophia Eva Anim, Coordinator of DOVVSU, Madina, said the paralegals after the training would help to educate the public on the various types of abuse and when necessary call for the intervention of DOVVSU on any issue, adding that it would help since the personnel of DOVVSU were inadequate to be present at all settings.

She said there are a lot of domestic and sexual violence issues, however, victims were often reluctant to report them to the unit.

“It is only when we hold sensitisation programmes that people come out to report to us, so there is usually an increase in the number of cases in the sensitisation months,” she added.

She appealed to individuals who are vulnerable to exercise extra caution at any time and report to the police immediately they fall victims to the unscrupulous acts of dangerous people.