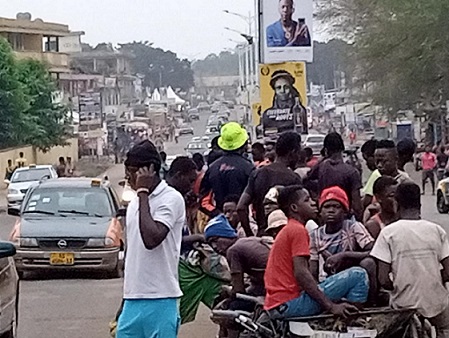 Mrs Cecilia Abena Dapaah, Caretaker Minister for the Ministry of Gender, Children and Social Protection (MoGCSP) has stated the resolve of the Ministry to rid the city of beggars, especially children.

She said it was illegal for children to be begging in the streets and said the Ministry would not tolerate such acts.

Mrs Dapaah said this at a monitoring exercise as part of the activities of the “Street Connected Children Project” initiated by the Ministry to rid the streets of Accra of street children after a stakeholder’s consultative meeting was held to tackle the phenomenon.

Street connected children are children between the ages of one and 18, or youth, 15 to 24 years who spend a portion or majority of their time on the streets living or working.

According to the United Nations Human Rights Office, 2012, it is estimated that tens to hundreds of millions of children and youth spend a portion or majority of their time on the streets.

Mrs Dapaah said street connected children were used in the business of begging for alms and selling on the streets, which was illegal in the country and extremely dangerous.

‘‘Everyone who has empathy for children has been touched by this phenomenon of people exploiting children by using them to beg, I think it’s the most hideous act that one can visit on one’s child or ward,’’ she said.

The Caretaker Minister expressed worry that the children who were supposed to be in school were rather in the streets risking their lives for the adults.

The Accra Police Command months ago, announced that it would begin series of operations to clear child beggars who were mostly believed to be nationals of some African Countries including Niger, off the streets of Accra.

Despite the efforts to rid the city of the children in a special exercise by the Accra Metropolitan Assembly (AMA), the menace still exists.

‘‘We are very hospitable, but we will not allow people to sneak through our borders and come and live anyhow, anywhere in Ghana. It’s not allowed anywhere in the world.’’

‘‘we have all heard clearly that they say they are from Niger, they are our brothers and sisters, yes, but we will contact the Embassy through our Foreign Ministry to see what can be done,’’ she said.

Mrs Dapaah expressed concern over the way they littered the streets and gave extra work to the Assemblies in cleaning the city.
She said the Ministry would collaborate with the Assemblies and the Ghana Immigration Service to execute the Project and assured that the streets would be cleared completely soon.

Madam Mariam, a mother from Niger, who lived with her husband and three children in the streets, said she had been in the country for a year.

Some of the children, in an interview with the Ghana News Agency, said they were brought to Opeibea, near the Kotoka International Airport, by their mothers to sell and beg for alms every morning.