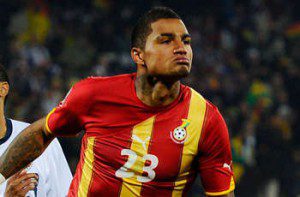 Ghana FA vice-President George Afriyie has given the slightest hint Kevin-Prince Boateng may have ended his international career.

The 28-year-old has been frozen out of the national after the country’s wrecked World Cup campaign in Brazil last year.

The AC Milan attacking midfielder is serving an indefinite suspension after he verbally abused then coach Kwesi Appiah.

A Government White Paper has warned the Ghana FA against inviting the former Schalke outcast into the team for any future engagements.

And hardworking Ghana FA vice capo George Afriyie has given the slightest indication the international career of the ex-Portsmouth man is over after referring to him as a ‘former’ Black Stars player.

“I wish him very well in all that he is doing. He is a Ghanaian, a former Black Stars player and I wish well.”he told the Ghanaian media.

Boateng appears to have been revived since he made a return to AC Milan, scoring in the side’s 2-0 win over Fiorentina over the weekend.