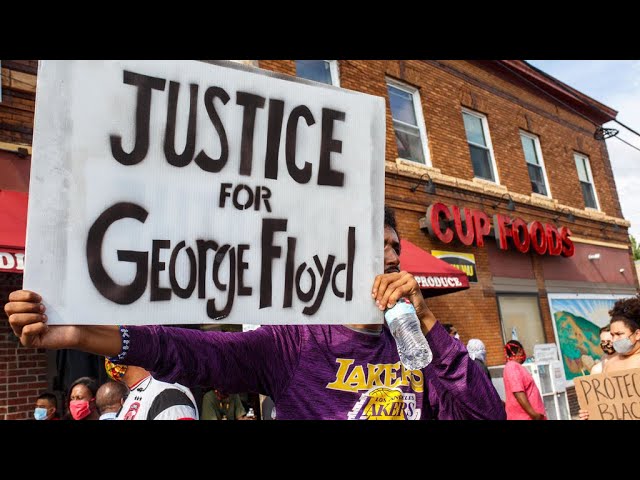 The brother of George Floyd, the African American man whose death in police custody inspired protests across America, urged lawmakers in a congressional hearing Wednesday to “stop the pain,” as Democrats and Republicans offered different remedies for the U.S. problem-ridden police system.

“I’m here today to ask you to make it stop. Stop the pain. Stop us from being tired,” Philonise Floyd, brother of George Floyd, said at a congressional hearing on Wednesday.

In his emotional testimony at the House Judiciary Committee’s hearing titled “Policing Practices and Law Enforcement Accountability,” the younger Floyd urged the lawmakers to honor those from around the world calling for change in the wake of his brother’s death.

“Honor them, honor George and make the necessary changes that make law enforcement the solution and not the problem.” “If his death ends up changing the world for the better, and I think it will, then he died as he lived. It is on you to make sure his death isn’t in vain.” said Philonise.

Wednesday’s hearing came one day after George Floyd was laid to rest, and two days after congressional Democrats introduced a piece of legislation seeking sweeping reforms to policing policies, which will make it easier to prosecute police misconduct cases and prevent excessive use of force by law enforcement.

Democratic congresswoman Karen Bass, chair of the Congressional Black Caucus that led the drafting of the Justice in Policing Act of 2020, said in her opening statement that she hopes the bill will pass both chambers of Congress and become law, so that “we never, ever, ever see again what we saw a few weeks ago.”

Calling police brutality “an embarrassment of our nation in front of the entire world,” Bass said the Unites States, which oftentimes points its fingers at so-called human rights violations in other countries, should honor its own commitment to human rights. “While we hold up human rights in the world, we obviously have to hold them up in our country.”

On May 25, George Floyd, during the final moments of his life, was put in neck restraint for eight minutes and 46 seconds by a white police officer in Minneapolis, even as he begged for his life. Derek Chauvin, the now fired officer who kept his knee on Floyd’s neck, has been jailed and faces murder charges.

“I can’t tell you the kind of pain you feel when you watch something like that, when you watch your big brother, who you looked up to your whole entire life die, die begging for his mom,” Philonise said.

While the Democrats stressed the urgency of reforming the broken police system to end police brutality and racial profiling, the Republicans, though also blaming racism, focused more on condemning the rioters that were agitated in the recent “Black Lives Matter” movement.

They argued that police officers and other law enforcement personnel constitute an important pillar ensuring the safety and security of local communities, and that violence against them should not be ignored.

Republican congressman Jim Jordan, ranking member of the judiciary committee, said at the hearing that George Floyd’s death was “as wrong as it could be,” while condemning the rioters. He also said the “majority of” the law enforcement officers are good people and first responders.

“It is absolute insanity to defund the police,” Jordan said, referring to a rallying cry frequently heard in the recent protests throughout the nation.

In an immediate response on Twitter, President Donald Trump hailed Jordan’s remarks as “a great statement … concerning Defunding (not!) our great Police,” adding that “this Radical Left agenda is not going to happen.” The Democrats in their proposed reform bill didn’t embrace the idea of entirely defunding police departments either. Instead, it will provide grants to community organizations, encouraging them to build partnerships that improve accountability.

However, not only is the Democrat-proposed legislation expected to undergo extensive scrutiny by Republicans on Capitol Hill – who offered their own blueprint for reform in a 10-section draft bill that included police reporting, accountability, training and relations — it’s also possible to be pushed back by the White House, which has indicated that stripping police officers of their immunity is a non-starter.

Asked whether Trump would support the police reform proposals rolled out by the Democrats, White House Press Secretary Kayleigh McEnany said at a news briefing Monday that the president was “talking through a number of proposals.”

Declining to get into the details of the president’s thinking, McEnany said that “there are some non-starters in there, I would say, particularly on the immunity issue.

“In addition to banning life-threating police tactics such as chokeholds and limiting the transfer of military-grade weaponry to state and local police departments, the Democrat-proposed bill also sought to reform the immunity doctrine that shields government officials, including police officers, from liability for conduct on the job unless they violate “clearly established” constitutional rights.

“We cannot settle for anything less than transformative structural change, which is why the Justice in Policing Act will remove barriers to prosecuting police misconduct and covering damages by addressing the immunity doctrine,” House Speaker Nancy Pelosi said Monday when introducing the bill.

Calling for swift action to pass the bill, Pelosi said Wednesday after meeting with Philonise Floyd prior to the hearing that injustice in the current police system “is readily apparent. The need to make the change is clear and the proposals to do so have been in the hopper for a while.”

“They had a very positive meeting with Senator Scott and it was very productive, and we do believe that we will have proactive policy prescriptions, whether that means legislation or an executive order,” McEnany said.