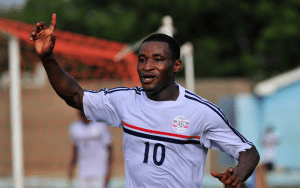 Liberty Professionals head coachGeorge Lamptey insisted that even though the exit of star player Kennedy Ashiawill be detrimental to the team, he is not worried about it.

The former Great Olympics and Accra Hearts Oak player disclosed that it will be better for the team to think about building a new strong side rather than concentrating on Ashia’s departure.

The 22-year-old Ghanaian arrived in Sudan over the weekend to complete a two-year deal with Sudanese giants Al Hilal but the Liberty trainer insists the team will cope without him.

We wish him the best and we would not prevent him from pursuing his dreams elsewhere George Lamptey mentioned.

As a coach you need to prepare your team for some of these things and the technical team is already cooking up an all round team with the players we have now, and hopefully we will be ready before the league starts.

Kotoko appeared to be in the race for the players signature ahead of their regional rivals, AshantiGold, and Accra Hearts of Oak, but the Liberty Professionals lad swerved all three suitors for a more lucrative offer tabled by the Sudanese side.