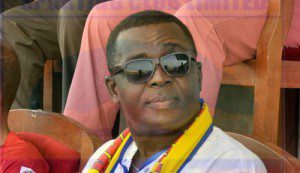 Just a few hours ago, new broke that the Managing Director of Accra Hearts of Oak, Gerald Ankrah has resigned. I placed a call to ascertain the authenticity of the news and after the call, my facial appearance changed.

Gerald answered the call with a shivering voice in a murmuring approach and said “I am in a meeting. I will talk to you in the evening.” I tried to get a ‘YES’ or a ‘NO’ for an answer to his resignation but before I could say Jack, he had dropped the call.

I sat back in my armchair and reflected on what actually is wrong with the Oak family and my conclusion was not far-fetched; the same old story.

The sickness of Accra Hearts of Oak has been with the club for some years now and any attempt to rescue the once conquerous giant of African football appears to be worsening the situation.

From the technical team to the administration and well as the communications department of the club appear very sickening such that Cuban doctors do not even show promise to curing Ghana’s sleeping giant.

I captioned this write-up as a setback to the Oak Family because it appears anytime the club is positioning herself to greatness, something gloomy happens to thwart the efforts of those who have been striving to push the club forward.

After the appointment of Coach CK Akonnor as the head coach of the Oak Family, many of us thought that the pendulum was swinging in a direction some of us have been craving for; building a future 64 Battalion with talented youths.

Just as Akonnor was appearing to have gotten hold of the club for greatness, the unfortunate rod of dismissal was pointied at him and the rest became history.

Then came my local ‘Jose Mourinho’, David Duncan. David Duncan inherited a team that had costed the Phobians close to GHC3,000,000,000 [for clarity of issues, I prefer using the old Ghana cedis] to build.

CK Akonnor had invested a lot in the recruitment of players but Duncan felt those materials were not materials he wanted. He sacked close to twelve players and brought in a new set.

The Duncan era saw the Phobians splashing close to GHC2,000,000,000 [2 Billion old cedis] to set up what many felt was a promising team. The Phobian family suddenly fell in love with the intelligent tactician but the unfortunate happened again.

Do you remember the rift between Duncan and the then MD, Neil-Armstrong Mortagbe?

Mohammed Polo came and regardless of the lack of support he enjoyed during his six months reign, he was able to place third with the team.

He eventually left for Herbert Addo to take over.

Then another sad thing happened. Herbert started the season on a very poor not but transformed the team to suit his style at a time the players were under psychological warfare. The players were not receiving their salaries on time and it reflected in their performance. The veteran coach eventually let the cat out of the bag and that became the genesis of his dismissal. He also took compensation.

My check have revealed that CK Akonnor, David Duncan and Herbert Addo took an amount close to GHC3b [3 Billion Old Ghana Cedis] as compensation packages, not talking about the amount spent on players.

In all, the amount of money spent on players as well as coaches’ compensation packages from the time of CK Akonnor to the era of Herbert Addo is close to GHC10b [10 Billion Old Ghana Cedis].

The question is, why has Hearts been spending on players and coaches’ compensation packages when this amount could be invested in paying players well and motivating them to play well, as well as hiring a coach for a longer period of time? Well, King Kenichi Yatsuhashi may be taking his package very soon.

The chronology of the sacking of coaches coupled with the resignation or otherwise of administrators simply points out that something is seriously wrong with the structure of the Oak Family.

Gerald may have his differences with the other management members but the little administrative transformations seen under his reign point to the fact that he would have done a good job then being frustrated to leave the system.

Now he is gone, a new one will take over, spend some time to settle and just as the engines gets hot for the flight to take off, he will be asked to pack his things or better still he will be frustrated to resign.

So will this vicious circle continue to ruin Hearts of Oak? When are the leaders realizing that team building is all about consistency and continuity in all aspects?

After visiting the training grounds of the Phobians a few weeks ago, I was convinced that they are building a side that will surprise many people when the league starts.

I saw the good job the administrators have done in terms of player recruitment and the confidence they had in the coach. I was convinced beyond reason that the team structure was taking shape and the administrators were also organizing themselves well.

But it appears that King Keni’s days are numbered with the resignation of Gerald Ankrah and another compensation package is being prepared.

Now, as Gerald has resigned, a new administrator will surely be appointed and there is now way his philosophy will be the same as that of Gerald. He will surely have his likes and dislikes and the pattern he wants to see the team adopting. If they appear different from his philosophy, you know the rest.

Gerald’s resignation must raise the alarm for the Rainbow Family to be aware that consistency is the key to success in the game of football.

The Phobians have been inconsistent over the last seven years and this has replicated in their performance compelling them to chase a major local silverware over the period.

But anytime I think about consistency and success, I remember this quote by Arsene Wenger: “When you look at people who are successful, you will find that they aren’t the people who are motivated, but have consistency in their motivation.”