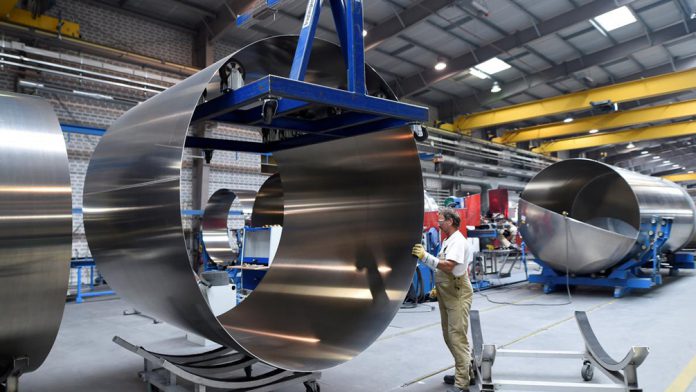 German business confidence this month hit its highest level since the end of 2018 amid hopes that the easing of coronavirus restrictions and an accelerated vaccination roll-out will power ahead the nation’s post-pandemic economic recovery.

The Munich-based Ifo institute said its closely watched business climate index climbed to 101.8 points this month from a May reading of 99.2 points.

“The German economy is shaking off the coronavirus crisis,” declared Ifo President Clemens Fuest releasing the index, which is based on a a survey of about 9,000 business leaders.

The index now stands at its highest level since November 2018 with boardrooms across the nation laying aside concerns about supply bottlenecks and labour shortages that have emerged in parts of Europe’s biggest economy.

Analysts had forecast a gain in the June index to 100.7.

German business confidence has been steadily rising since January, when the Ifo index slumped badly as a third wave of the pandemic engulfed the nation and amid a lockdown on economic and public life.

“The further rise in the Ifo in June all but cements that gross domestic product bounced back in the second quarter,” wrote Claus Vistesen and Mel Debono, economists with the Pantheon Macroeconomics research group in a note to clients.

Germany’s central bank this month sharply raised its 2021 growth forecast for the country to 3.7 per cent, despite a 1.8-per-cent first-quarter slump in gross domestic product (GDP) when the economy was hit by the fallout from the crisis.

Now, the Frankfurt-based central bank sees German GDP powering ahead to 5.2 per cent next year before slowing to 1.7 per cent in 2023.

Driving the Ifo index higher in June was the executives’ assessment both of current business conditions and expectations for six months down the track.

Sentiment rose across all major industrial sectors with retailing, which has been hit hard by the economic fallout from the crisis, posting its steepest rise ever recorded by the survey.

Germany’s key manufacturing sector, which has benefited from a strong pickup in demand from the US and Chinese economies, also continued to go from strength to strength.

The business climate in the manufacturing sector is now at its highest level since April 2018, Ifo said.

Monthly German exports to non-EU nations, which includes the US and China, fell in May by 3 per cent, the Federal Statistical office (Destatis) said in data also released on Thursday.

However, non-EU exports raced ahead by 27.9 per cent compared with a year earlier as the global economy was gripped by the pandemic, the Destatis data showed.

MPS to get additional 15 Gantry Cranes at Terminal three