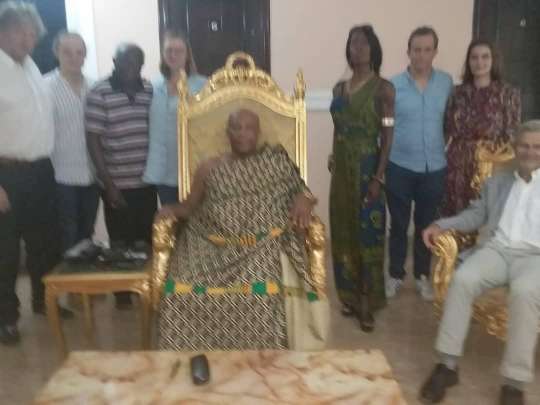 German chocolate manufacturing company, “Barbara Kroner Schokoladen Manufaktur”, has pledged to give strong support to the production and application of organic fertilizers by Ghanaian cocoa farmers.

Its Chief Executive, Barbara Kroner, said they had already visited the Yayra Clover Limited, a private business entity, which has been using organic fertilizer to plant and produce cocoa at Suhum in the Eastern Region.

She announced plans by her company to buy cocoa directly from Ghana for the production of chocolate in Murnau, near Munich in Bavaria.

This was when she led a group of Germans on a visit to deepen social and cultural ties between the German city of Murnau and Denkyemuoso, a sprawling community in the Atwima-Kwanwoma District.

Germany-based Ghanaian, Albert Osei-Wusu, has been instrumental in efforts at forging stronger relations between the two communities.

“Barbara Kroner Schokoladen Manufaktur”, a family business, has been into chocolate production for about two centuries.

Torinta Wolfart, an artist, and English teacher, spoke of the start of a project to teach Ghanaian children the German language.

She said it was important to help the young ones to learn different languages, adding that, this was the way to go to make them competitive in today’s world.

She underlined her unwavering determination to provide the vital infrastructure and learning tools to make the academic environment of the German/Ghanaian School child-friendly.

She would go to every length to assist the children to build self-confidence, realize their full potentials and to live their dreams.

Nana Antwi Agyei Brempong II, the Atwimahene, took the visitors through the history of the community and said they were eager to build on the friendship with the Germans.

In line with this, they would soon sign a Memorandum of Understanding (MOU that would provide the basis for education and cultural exchange programmes between them.

Nana Brempong said the expectation was that the youth in the area would take advantage of the exchange programmes to pursue academic careers.