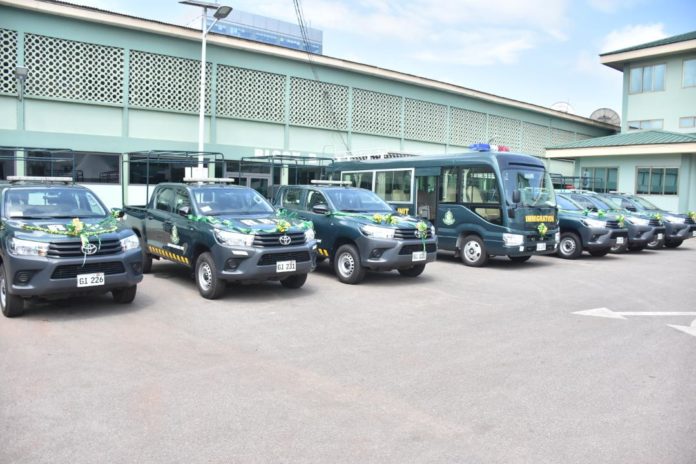 The German Government has presented six pick-ups and a mini bus to the Rapid Response Unit (RRU) of the Ghana Immigration Service (GIS) to boost its operations against migrant crimes.

Mr Kwame Aauah Takyi, the Comptroller-General of Immigration (CGI), said he was confident the vehicles would boost the morale of the officers to respond swiftly to emergency calls by the operational teams should there be any attack.

He indicated that the vehicles had come at a better time to help the Service respond to current security challenges that had the propensity to affect Ghana’s border security.

“The vehicles will assist in the fight against illegal entries and other transnational crimes at the borders,” he added.

The CGI explained that the setting up of the Rapid Response Unit last year was one of the interventions aimed at providing support to the operational units like the Border Patrol Unit (BPU) and the Enforcement Section of the GIS.

He noted that the Officers of the RRU had undergone enhanced training from the Ghana Police Counter Terrorism Training School at Huhunya in the Eastern Region and the Asutsuare Military Training Camp of the Ghana Armed Forces.

“The Officers, who have been trained, constitute the core personnel to support current operations as and when exigency demands, especially along our borders. Key examples are Operation Calm Life, Operation COVID Safety, and Operation Conquered Fist, which are joint exercises by the security agencies aimed at fortifying our northern borders against any spill-over to extremist incursions and other transnational crimes into our territory,” he explained.

Mr Takyi added that the current happenings at the frontiers of Ghana brings to the fore the need for more support to adequately resource the Service to enhance its operational capabilities.

The Deputy German Ambassador to Ghana, Mr Helge Sander, noted that the donation was part of the German Government’s contribution to concerted international efforts aimed at supporting Ghana to strengthen border security.

He said strong border security mirrored a stable internal security and that with the RRU equipped with the seven operational cars, it would strengthen the capabilities of the GIS to react against terrorist threats along Ghana’s land borders.

“Protecting the borders means to have a strong filter against criminal or terrorist threats inside the country, today and in the future,” he said.