dpa/GNA – The number of people out of work in Germany rose by 193,000 to 2.901 million in January, the Federal Employment Agency (BA) said on Friday.

The increase in the unemployment rate, of 0.4 percentage points to 6.3 per cent, is typical for the time of year.

The monthly increase was even slightly lower compared to the turn of the year between 2019 and 2020.

However, the year-on-year change in January 2021 unemployment showed a sharper rise, with 475,000 more people looking for work than in the same month last year, the agency said.

BA head Detlef Scheele commented that the labour market was robust at the start of 2021 despite the coronavirus crisis. “Measures to contain the pandemic are making their mark though,” he said.

Germany has largely been able to avoid mass lay-offs thanks to a state furlough scheme, which covers the bulk of workers’ wages for companies struggling in the pandemic.

Since November, when the country reintroduced sweeping measures on public and economic life to curb a second wave of infections, the number of applications registered with the agency for such support, known as short-time work, has been on the rise.

The most up-to-date figures available on workers signed up for the scheme are from November, when 2.26 million people were receiving short-time work payments, the agency said.

Despite the recent rise in applications, the numbers are still considerably down compared to the height of the crisis amid the first lockdown. Almost 6 million people were receiving furlough benefits in April. 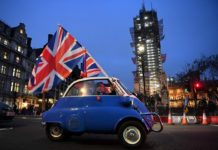