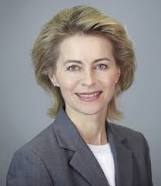 “Leadership is not to lead with Pickelhaube,” she told the Munich Security Conference, referring to the spiked helmet worn by German soldiers in the 19th century.

Rather, Germany should “lead from the centre,” so that there is a level playing field for partners with fewer resources. As an example, she pointed to military integration between Germany and NATO partners Netherlands and Poland.

“Leading from the centre can mean to fight together. It can also mean to enable others,” she said, referring to Germany’s recent decision to arm Kurdish fighters in Iraq.

NATO, the European Union and the Organization for Security and Co-operation in Europe (OSCE) are all valuable in helping to resolve the conflict in Ukraine, she said.