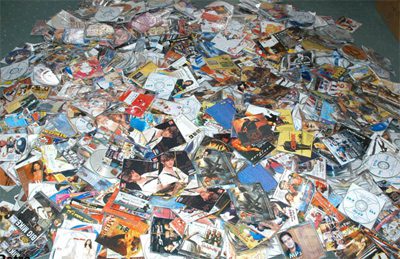 Some of the pirated works

THE Ghana Music Rights Organisation (GHAMRO) has resolved to exterminate the piracy menace that has bedevilled the music industry in the country once and for all.

On Thursday, June 19, a joint operation of the anti-piracy taskforce of the Ghana Music Rights Organisation (GHAMRO) and armed police personnel from the Central Police Station in Accra scattered the works of some music piracy operators at the Rawlings Park, Okaishie, Makola and Tema Station.

The apprehended suspects were sent to the Central Police Station where they were charged with the offence of copyright infringement and are currently being processed for court.

It would be recalled that under the Carlos Sakyi-led administration, GHAMRO has waged a consistent and successful campaign against music piracy, resulting in the imprisonment of a number of music pirates.

Speaking to BEATWAVES in an interview, GHAMRO?s anti-piracy Coordinator, Daniel Adjei, stated that GHAMRO is determined to flush out all music thieves and create an environment for musicians and producers to prosper.

The items seized during the operation dubbed ?Operation Scatter Music Pirates? included computer laptops, system units, desktops, pen drive, among others, used by the pirates in their criminal activities.

The   Chairman of GHAMRO, Carlos Sakyi, in an interview promised that anti-piracy operations would be intensified and sustained till piracy becomes the most unprofitable venture in the country.

He stressed that ?the activities of pirates if not checked, could kill creativity in the music industry as the pirates are living on the sweat and toil of musicians and music producers.?

The GHAMPRO boss noted that piracy does not only rob right owners of their expected revenue but significantly tamper with the quality of their products, thereby causing public disaffection against them.

Carlos Sakyi warned that music and movie sellers should desist from selling pirated musical works and rather purchase original copies of music produced from authentic sources.

Police advised public to be circumspect in executing “See Something: Say Something”