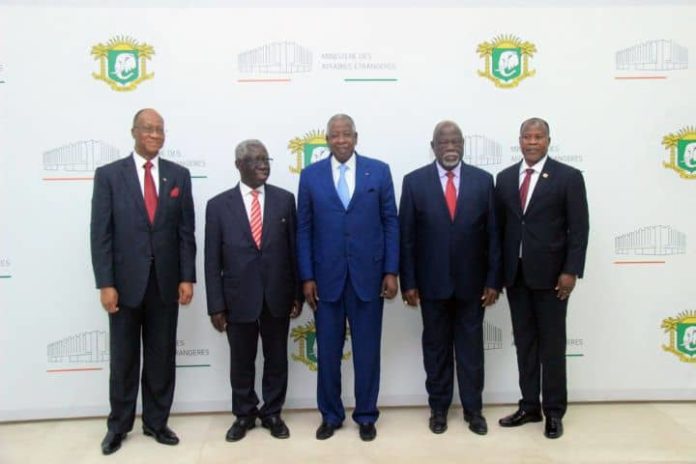 The Senior Minister, Hon. Yaw Osafo-Maafo, as the Chairman of Ghana’s committee of the joint implementation of the International Tribunal for the Law of the Sea (ITLOS) judgement, led a fourteen (14) member delegation to Cote d’Ivoire on a third Ghana – Cote d’Ivoire ITLOS judgement implementation meeting on Thursday, 19th to Friday, 20th September, 2019 in Abidjan, Cote d’Ivoire.

According to a release from the Snr. Minister’s office copied to Newd Ghan, “The Cote d’Ivoire delegation of fifteen (15) persons was led by the State Mediator, H.E. Adama Toungara.

The two-day meeting was held to discuss among other issues the draft framework agreement for cooperation regarding the maritime boundary, hydrocarbons and other natural resources particularly in the area of exploitation and utilization of seabed resources that may straddle the boundary

The two countries would be considering another important joint co-operation in respect of the use of Gas from both countries to be utilized in the production of power to serve as additional power hub for Cote d’Ivoire, Ghana and other West African countries.

The Senior Minister in his statement mentioned that Ghana has since deposited her maps and charts with the Division for Ocean Affairs and the Law of the Sea (DOALOS) of the United Nations (UN) after parties had jointly plotted the seven (7) coordinates and azimuth in accordance with the ITLOS ruling on 10th August, 2018.

He indicated that the enhanced cooperation will lead to certainty and boost investor confidence in mineral exploration within the Exclusive Economic Zone and beyond on the Western side of the country.

The third meeting was successfully held in Abidjan and it ended with a joint communique signed by Hon. Yaw Osafo-Maafo as Senior Minister and Head of Ghana’s delegation and H.E. Adama Toungara as State Mediator and Head of Cote d’Ivoire delegation.

The following decisions were reached as contained in the joint communique.

Cote d’Ivoire and Ghana also agreed for the relevant institutions of both countries to expeditiously study the feasibility of a project to build and operate a Thermal Power Plant at the border of the two countries, with natural gas fuel supplied from Ghana and Cote d’Ivoire and the power produced to be dispatched to both countries.

The Parties believe that such cooperation was laudable and in line with the Strategic Partnership Agreement (SPA) for cooperation signed between the two Heads of States of both countries on 17th October, 2017.

ATTACHED IS THE COMMUNIQUE.