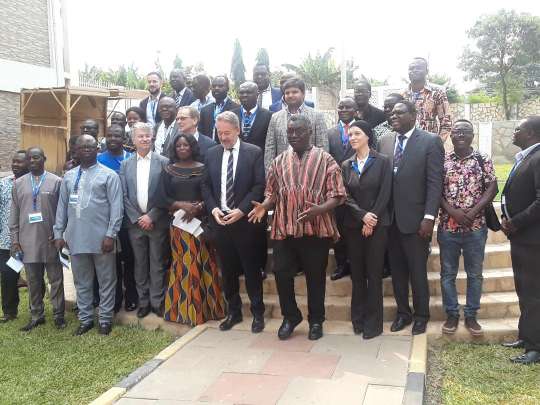 The kick-off and groundbreaking ceremony, held on Tuesday in Accra, thus, paved the way to the beginning of the construction of the Plant to be situated in Atwima Nwabiagya in the Ashanti Region.

The pilot project is being embarked upon against the background of Ghana’s quest to find long term solution to the menace of solid waste by treating and generating power from the treated waste.

Additionally, the project is expected to help close the carbon cycle by developing the value chain of the process with the production and utilization of compost, which would be sold to farmers to boost agriculture and cut down on mineral fertilizer whilst improving the soil structure.

Speaking at the ceremony in Accra, Professor Kwabena Frimpong-Boateng, Minister of Environment, Science, Technology and Innovation, said the Plant was expected to be built and operated within four years as a pilot, after which 10 or more are expected to be built within the next 10 to 20 years in different regions.

Under the project, the Minister explained, the “sun and other biodegradable materials would be used to create and generate energy and biogas while plastics and other things would go through paralysis to also produce energy.

“We are involving all the universities that are engaged in energy production and the research institutions as well, who are expected to help lay the foundation that would help Ghana build its own energy systems in a few years’ time”, he said.

“It is an environmental and sanitation project, which would help us clean our environment and generate energy that would compromise solar and would involve various sector Ministries, including the Local Government, Agriculture, Education, Energy and Sanitation”.

The Minister described the project as a reflection of Ghana-German cooperation, which was also tightening relationship between the two countries.

He said the universities had a critical role to play to ensure that Ghana was able to turn its raw materials that were becoming a menace into a better source of alternative.

Mr Christoph Retzlaff, the German Ambassador said the project was being funded by the German government with an amount of six million Euros and would help create 50 new jobs in the Ashanti Region.

“We intend to partner our Ghanaian counterparts to set up 10 more hybrid waste to energy plants in Ghana and these would create about 1,000 new jobs in and be a sustainable solution for the waste disposable problems in the country” he said..

“It would save a lot of emissions and about 800,000 tonnes of harmful emissions could be save each year”.
The project would also enhance human resource capacity building, high level of research and development.

The German Government through the Federal Ministry of Education and Research of Germany (BMBF) being represented by the Project Management Agency Julich, was collaborating with other universities, in both Ghana and Germany, to undertake the project that has the West African Science Centre on Climate Change and Advanced Land Use (WASCAL), based in Ghana, as the main implementer.

The project is also expected to create opportunity for German Small Medium Enterprises to take advantage and extend their products and services in the area of waste to energy in Ghana.

It would contribute to Ghana’s climate change mitigation strategy as well as to the inclusion of renewable energy.