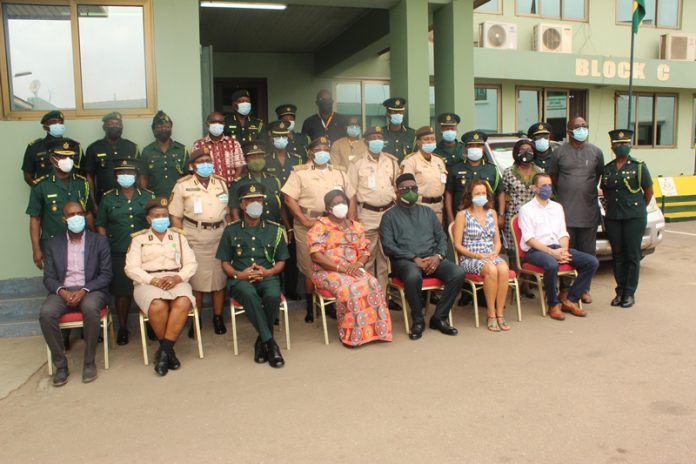 A two-day exchange programme between the Ghana and Nigeria Immigration Services is underway in Accra to deliberate on progress made, so far, in developing a gender policy strategy.

The exchange programme would provide opportunity for both the Ghana Immigration Service (GIS) and Nigeria Immigration Service (NIS) to share experiences on the process, scope and focus of their respective gender strategies and prepare the basis for future multi-lateral engagement in the sub-region.

The programme is within the framework of the Support to Free Movement of Persons and Migration in West Africa Project, funded by the European Union (EU) and the ECOWAS Commission.

The exchange programme is part of activities to mark this year’s International Women’s Day on the theme: “Women in Leadership: Achieving an Equal Future in a COVID-19 World,” which falls on March 8.

Mr Ambrose Dery, the Interior Minister-Designate, in a speech read for him at the opening ceremony, said the programme came at a time the world was hit with the COVID-19 pandemic, which was harming health, social and economic well-being of all, with women at the centre.

The International Council of Voluntary Agencies says women are leading the health response teams, making up almost 70 per cent of the healthcare workforce, exposing them to a greater risk of the pandemic.

That, the Minister said, called for an immediate policy response for women, taking into account their peculiar needs, respective roles and responsibilities.

Mr Dery said women in Ghana’s Parliament had increased to 40 out of the 275 membership, totaling
14 per cent, and hoped to meet the gender equality by 2030 as contained in the Sustainable Development Goal Five.

He said research revealed that representation of women in Parliament across the world was less than 25 per cent and more than one in every three women were victims of gender-based violence.

Ghana is a signatory to the Beijing Platform for Action and other global institutions that promote gender equality and the empowerment of women and girls.

Mr Dery said though appreciable progress had been made in placing women in very high-profile positions, the Government was yet to attain the full benefits of gender equality in leadership roles.

“Women in Ghana constitute more than half of the country’s population that is why it is vital we continue to implement programmes to enable their equal participation in social, economic and political sectors,” he said.

Mr Dery said government instituted proposals on achieving gender equality in the security servicers in July 2017 and encouraged men to advocate for women’s right and gender equality for holistic development.

Mr Mark Asuah Takyi, the Comptroller-General of GIS, said the Service had established a Gender Unit as part of efforts towards achieving gender equality and had made strides by recruiting more females into the Service.

He announced that a Draft Gender Policy for GIS was in the offing and that an action plan for its implementation had been developed, stressing that an increase in female leadership had a potential benefit of increasing gender uniformity.

He urged the participants to contribute the knowledge acquired to the development of strategies in mainstreaming gender in their respective countries.

Mrs Maria-Luisa Troncoso, the Head of Governance Sector, European Union, said the Union would continue to support gender equality programmes in the region to inspire immigration agencies in other ECOWAS member states.

Mrs Edith Onyemenam, the Assistant Comptroller-General of NIS, said the collaboration would strengthen relations between the two Services, deepen professional ties and build a strong regional integration for gender issues.