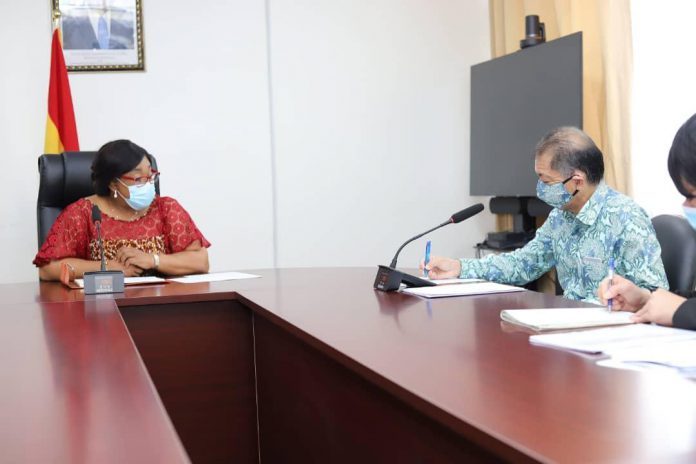 Madam Shirley Ayorkor Botchwey, the Minister of Foreign Affairs and Regional Integration, has requested Japan’s support in Ghana’s bid for a non-permanent seat on the United Nations Security Council from 2022 to 2023.

Madam Botchwey made the request when Mr Himeno Tsutomu, the Japanese Ambassador to Ghana, paid a courtesy call on her in Accra.

The meeting, which was at the instance of Mr Himeno, enabled the Minister to brief the Ambassador on the priorities of the Akufo-Addo Administration in its second term.

On the UN Security Council Reform, the Minister said Ghana attached great importance to global governance, hence the Security Council Reforms, which was why Ghana had been a strong advocate of reforms within the UN to make it more democratic and representative to address the complex challenges of international peace and security.

She recalled that President Nana Addo Dankwa Akufo-Addo was instrumental in the processes leading to the Ezulwini Consensus and assured that Ghana would continue to adhere to it and work closely with Japan to move the negotiations forward, and in the right direction.

She expressed appreciation to the Government of Japan for the immense support and cooperation it had provided to successive governments of Ghana in their diplomatic relations and pledged her determination to work with Mr Himeno to further strengthen the bonds of friendship based on respect, solidarity and development.

On strengthening diplomatic relations, Madam Ayorkor Botchwey said the Government intended to promote the exchange of high-level visits and interactions between Ghanaian and Japanese leaders at all levels.

She said Ministers of State had been encouraged to engage more with their Japanese counterparts and request the Ambassador to assist in facilitating such engagements when the need arose.

She expressed the hope that the two sides could work together to ensure that Prime Minister Yoshohide Suga paid a visit to Ghana sometime next year.

Mr Himeno briefed the Minister on preparations towards the Eighth Tokyo International Conference on African Development scheduled for 2022 in Tunisia, as well as the Nutrition Summit to be held in Japan in December, 2021.

He touched on topical issues of interest to Japan, notably the UN Security Council Reform, North Korea and Japan’s contribution to peace and security in Africa, and development cooperation projects in Ghana such as improvement in the Tema Motorway Roundabout (phase two).