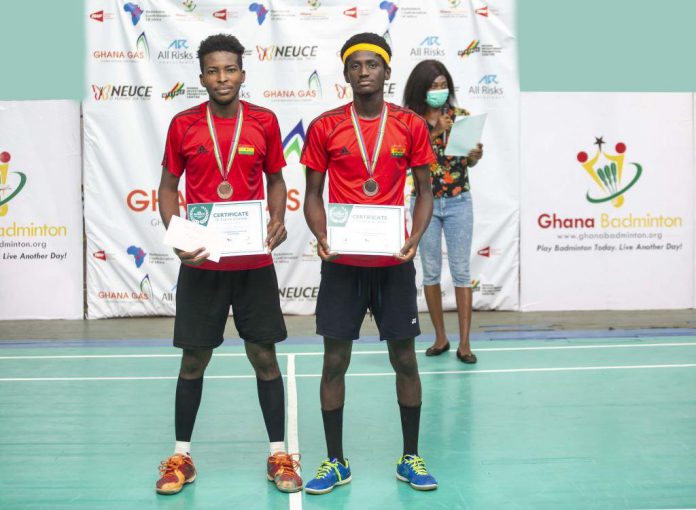 The Ghana Badminton Association (BAG) has held its National Badminton Doubles U-35 tournament at the DG Hathramani Hall of the Accra Sports Stadium, with all COVID-19 protocols, strictly observed.

The 2021 National Badminton Doubles U-35 tournament is a Grade 5 Level ranking tournament that saw the best pairs of players playing in the Men’s Doubles, Women’s Doubles, and the Mixed Doubles Event.

The tournament was one of the selection trials for the 2021 Africa Badminton Championship and 2022 Commonwealth Games qualifiers, which began in February 2021 giving athletes critical national ranking points towards competitions.

In the Men’s Doubles Event, finally, Felix Amassah and Noah Ayim won against Samuel Lamptey and Aaron Tamakloe by 22-20, 20-22, 21-15 lasting almost 90 minutes of play. In the Women’s Doubles Event finals Prospera Nantuo and Rabiatu Ofoli won in a grand style up against Gloria Liu and Marcia Long-18-21, 21-9, 21- 16 which was a delight to watch with an amazing blaze of talent and brilliance.

In the end, Felix Amasah and Noah Ayim won the most decorated athlete pair distinguished award-based on performance, discipline, and athlete orientation.

All participants received participation and winners’ certificate and tournament prizes.

Mr. Evans Yeboah, President & Board Chair of BAG highlighted the success of the event saying “amid COVID pandemic was important for the sport locally as it has invigorated our 2021-2024 High-Performance Plan targets and our 2021 Badminton in School’s Delivery Programme”.

“The National Open Grade 5 ranking level is our flagship doubles tournament for the year, and during this pandemic, it speaks volumes when companies like Ghana Gas, Ghana Investment Promotion Center, and All Risk Consultancy had supported us to deliver this successful tournament with several networking meetings with these and other important partners of the national association.”

Mr. Daniel Danso, BAG Chair of Events and High-Performance Committee said “we are focusing on building our team to its optimum and this tournament provided the right atmosphere for our exceeded expectations. Our spectators and volunteers also provided optimal service on all levels”

“In mid next month, our Veterans and U15 National Championship Series, which is the country’s most prestigious veterans and juniors’ championships following a successful rebounded of the championship since 1989.”

The winners of each category were awarded a medal and crowned National Veterans Champion in their age category.