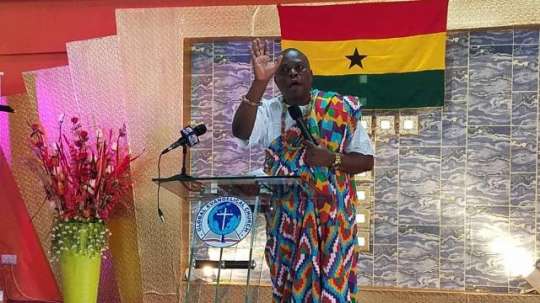 Reverend Innocent Cobina Agbenuvor, Senior Pastor of the Ho Fiave Global Evangelical Church on Sunday said the nation belongs to God, and must not be overrun by cultures long abhorred as abominable.

Rev. Agbenuvor who was reacting to an alleged planned conference by the Lesbians, Gays, Bisexuals and Transgender (LGBT) in Ghana said Ghana was built on Godly principles and values, and appealed to the citizenry not to allow it to be intercropped with “evil seed”.

The Senior Pastor who was delivering a sermon at a special service to climax the church’s Ghana Week celebrations, called on the President, Parliament, and opinion leaders to block the planned conference, adding that the nation was already hard-pressed by its share of challenges.

“LGBT does not belong in Ghana. Their planned conference in June would not take place. So long as God is on the throne, He would not allow them to propagate their evil seed.

“The nation Ghana belongs to God and not to LGBT. I believe Parliament is against it. Kuffour, Mills, and the others were against it. I believe our government, which rode on the back of God to win the seat with the slogan ‘the battle is the Lord’s’, would not allow it.

“We don’t hate them but we hate their deeds. If they want to repent we will accept them back. But to import them into Ghana, it would not happen.

Ghana is for God, and would reign peacefully and God’s kingdom would reign forever and ever,” he said.

The Church has set aside the first week in the month of March every year, to celebrate the Nation, during which revivals, and other social activities are held to foster the development of positive African values in its members.

This year’s celebration is on the theme “Our Nation, Our Heritage”, and saw all members clad in traditional attire.

Rev. Agbenuvor led the congregation to pray for the Nation, asking for peace and security before, during and after the upcoming general elections.

Some traditional foods and drinks were sampled as part of the celebration, with a quiz competition in the afternoon.