The U. J. Esuene Stadium came alive when the Ghana Carnival Queens defied the stormy weather to place second at the recently held second Carnival Calabar International in Cross River State Capital of Calabar in Nigeria. 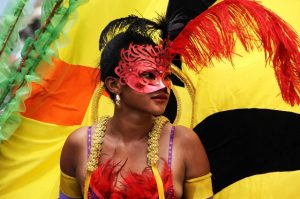 The ‘Chale’ chanting audience at the stadium with the mention of Ghana stood still enjoying the Steady performance from the Ghana Carnival Queens.

The sultry dressed Ghanaian carnival beauties along with the talented quartet of acrobat rocked the half packed stadium with guests such as the Executive Governor of Cross River State, Professor Ben Ayade and other dignitaries.

Nana Kwame Dadzie, the Artistic Director and Leader of the Ghana Carnival Queens, told the GNA that he was grateful to the Cross River State for inviting the group twice to showcase Ghana’s version of the carnival.

He said the Ghana Carnival Queens was poised to do more with this feat.

The month long celebrations was the 12th edition of the carnival and was held on the theme: “climate change.”

It was to create awareness of the effects of climate change on the environment.

Highlights of the events featured the culture carnival display with the penultimate of the annual event being the Carnival parade and float and the grand arrival international performance at the E.J Eussne Stadium.

Prof Ben Ayade, the Executive Governor of Cross River State, addressing the various groupings said, the carnival, which had gained international recognition over the years had grown bigger and better.

He said the carnival represented the true vitality, unity and harmony that signified the growth of Africa.

“As we have started today, this is the beginning of a new dawn in Africa. Calabar Carnival remains the largest street party in Africa,” he added.

He said as a government, they would continue to promote and sustain the hospitality and tourism that the state was known for.

He also described the annual Calabar Carnival as the melting pot of Africa’s hospitality.

The International Carnival is a new introduction by the Executive Governor of Cross River State Professor Ben Ayade last year.

It is held on the 29th of December a day after the main Street Party.