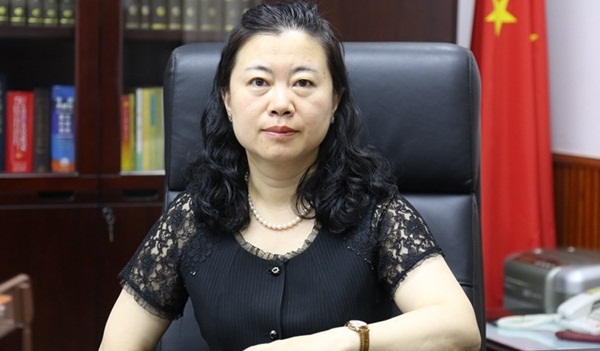 Trade between Ghana and China, its largest trading partner, amounted to US$ 5.976 billion in 2016.

The trade volume between the two countries in the first quarter of this year reached nearly US$1.4 billion.

Madam Sun Baohong, the Chinese Ambassador to Ghana, told the Ghana News Agency in an interview, which sought to assess the strength of the long-standing relations in view of recent developments and the prospects for future cooperation.

According to statistics by Ghana Investment Promotion Centre, China’s investment in Ghana reached US$ 323 million in 2016; with 36 new investment projects.

Madam Sun said the bond was even poised to see more fruits with the opportunities offered under the major development plans earmarked by the Government, such as the “One – District, One Factory” and “Planting for Food and Jobs”.

As the requisite experts on both sides are engaging to work out the specifics for collaboration, Madam Sun expressed optimism to achieve a win-win outcome, saying:  “We will strengthen policy connectivity with the Ghanaian side, make full use of each other’s advantages, and promote cooperation in infrastructure, capacity building, manufacturing and agriculture.”

China, which has been a very close and faithful ally of Ghana since independence, she assured would solidly and steadily make greater contribution to the economic restructuring and industrialization of the country.

In furtherance of this, Vice President Mahamudu Bawumia would arrive in China on Tuesday, June 20, for a high level- official visit expected to expand the scope of exchanges at the governmental level and that of the people to people to boost the socio economic and cultural ties.

During the five-day visit, which is at the invitation of his Chinese counterpart, Li Yuanchao, Dr Bawumia would meet Chinese leaders and leaders of the Communist Party of China (CPC) and discuss bilateral, regional and international issues of common interest.

The visit would be the first by a high-level government official to China since the New Patriotic Party (NPP) took office in January, this year.

Throwing more light on China’s commitment to support Ghana to improve the well-being of her people, Madam Sun said the grant project by the Chinese Government to build 1000 boreholes was 80% completed.

Additionally, the Savannah Accelerated Development Authority (SADA) would soon receive a batch of agricultural machinery to support its work towards of improving the livelihoods of those in the poorest zone of the country.

On how ‘The Belt and Road Initiative’, China’s present Kingpin programme, would benefit Ghana, Madam Sun said it was very much in line with the aim and ideas of China-Ghana and China-Africa cooperation.

“The major social and economic development plans of the NPP Government are highly consistent with the Belt and Road Initiative as well as the relevant content of China-Africa Ten Cooperation Plans under the framework of Forum on China-Africa Cooperation,” she explained.

“Ghana, with its political stability, open market, rich resources and abundant labour forces, has all along been a model for development and openness in West Africa,”

In conducting China-Ghana cooperation, Madam Sun stated that, China would continue to carry out the Silk Road spirit of peace and cooperation, openness and inclusiveness, mutual learning, mutual benefit and win-win results.

China, she said, would also adhere to the principles of sincerity, practical results, affinity and good faith and uphold the values of friendship, justice and shared interests.

The Belt and Road Initiative was first announced by Chinese President Xi Jinping in 2013.

By borrowing the historic symbol of ancient Silk Road, the Belt and Road Initiative has been given a new connotation of era, which is to maintain the open world economic system and to promote global peace, cooperation and common development.

The Belt and Road Initiative thus aims at strengthening policy, infrastructure, trade, financial and people-to-people connectivity to promote free flow of economic elements, efficient allocation of resources and deep integration of markets of countries along the line.

These are to create an open, inclusive, balanced and favorable regional economic cooperation framework for all parties.

Chinese enterprises have built 56 overseas economic and trade cooperation zones in more than 20 countries, creating nearly US$1.1 billion revenue and 180,000 jobs for the countries concerned.

China has over the years, made significant contribution to Ghana’s economic and social development of Ghana by investing and financing projects such as the Bui Dam, Sunon Asogli Power Plant, natural gas infrastructure, telecommunications backbone networks and distance education projects.

It has also undertaken water supply projects, supported the Africa World Airlines (AWA) and is undertaking multiple grant projects in Ghana, bringing tangible benefits to people of both countries.