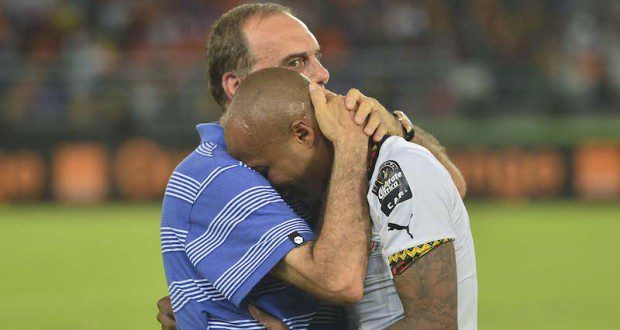 Ghana coach Avram Grant has hailed his gallant Black stars playing for their splendid performance in the African Nations Cup despite losing the trophy to Ivory Coast at the Estadio de Bata. The Black stars who were gunning for their fifth continental title sucummed 9-8 on penalties to Ivory Coast despite taken a two nil lead in the spot kicks and the foemer Chelsea manager who led the team to the grand finale insists he is satisfied with the perfornace from his boys.

?I?m so proud of my team and they always make me happy. To reach the final is a big achievement. The players have shown a lot of good things at this tournament. Grant noted at the post match press conference

He added ?We were the better side against a team that has some of the best players around. It was down to penalties and the opponent scored one more than us.

?Every Ghanaian can be proud of this team,? he concluded.

Ghana captain Asamoah Gyan also said that he does not regret their performance despite losing to Cote d?Ivoire on penalties.

The Al Ain goal machine was subbed just before the shoot ? out by Emmanuel Agyemang Badu and he sat on bench see his team lose African biggest trophy to the Ivorians.

Though Gyan was not pleased with the outcome of the match after failing to lift the trophy but had this to say after the match.

?Being outside, I had to support my colleagues. We were leading 2-0 and Cote d?Ivoire came back and they won. We had an edge to win but that?s football.

?I don?t regret our performance. Cote d?Ivoire have lost twice on penalties (2006 and 2012) and this was their third time and they won it. I?m sad at the moment. We lost today but its not over yet.

?We were hoping to make history, but it did not happen,?

Gyan was among the Ghanateam that lost narrowly to Egypt in Angola 2010.

Having failed to end the Black stars trophy drought, the former Sunderland strike would be looking forward to win the ultimae probably in 2017 where Ghana are likely to host the tournament.