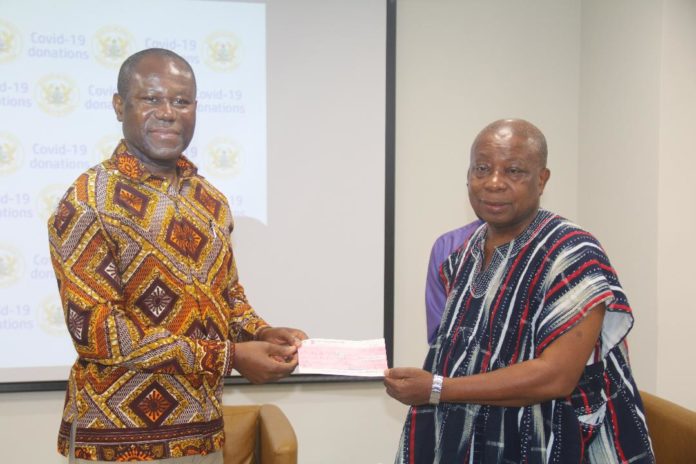 The Ghana Cocoa Board on Tuesday donated some items and a cheque to the Ministry of Health to support government efforts to fight the coronavirus pandemic in the country.

Presenting the items, Mr Joseph Boahen Aidoo, the Chief Executive Officer of the Cocoa Board, said the sanitizers were produced from the Cocoa Clinic in Accra by their Pharmacists led by Dr Edward Ampofo, the Chief Pharmacist.

He told the Minister that he and his three Deputies were also donating 50 per cent of their next three months salaries into the National COVID-19 Fund instituted by Government under the leadership of President Nana Addo Dankwa Akufo-Addo to fight the pandemic.

He said the country was going through difficult times and called on institutions to support the President to fight the pandemic.

Mr Kwaku Agyeman-Manu, the Minister of Health, said the donation was massive and that the items would be used for the intended purpose.

He said Government had held and continue having meetings to chase the virus out of the country and that the frontline workers were still monitoring the infected persons, observing the people who are in quarantine and still making some contact tracings in all communities identified as hotspots, adding that, “Government is running a free test of the virus at the various public hospitals and advise the citizenry not to be afraid to go and test.”

Dr Agyeman-Manu said the five deaths that had occurred were as result of the patients having co-mobilities and that their deaths could not be strictly attributed to the COVID-19 pandemic.

He called on Ghanaians to break the chain by staying at home or where ever you are in the country to prevent the spread of the virus.

He also thanked the Ghana Cocoa Board for the gesture and assured them of the maximum used of the items and equal distribution of the natural cocoa drink to the frontline health workers.