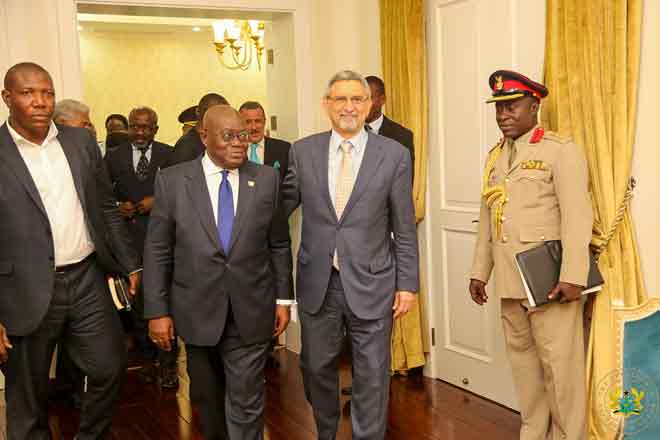 Ghana and Cape Verde have resolved to begin the process of developing stronger ties between themselves, as well as exploring areas of co-operation to the mutual benefits of their people.

For starters, Ghana is to deepen cooperation in the areas of fisheries and tourism, for which Cape Verde is noted, through the sharing of expertise and best practices.

This came to the fore at a meeting between President Nana Addo Dankwa Akufo-Addo, and his Cape Verdean counterpart, Jorge Fonseca, on Friday at the Presidential palace, in Praia, at the beginning of his 3-day visit to that country.

President Akufo-Addo indicated that countries or groups of countries with the largest share of world trade are located within regions with the highest share of intra-regional trade.

With trade between the countries of the African regions remaining low compared to other parts of the world, President Akufo-Addo noted that this was evidenced in the low volumes of trade between Ghana and Cape Verde, which amounted to $5 million in 2013, reducing to less than $200,000 in 2016.

For a region that has made the choice of pursuing integration, President Akufo-Addo bemoaned the fact that “we have not done much as we should have in liberalising and promoting trade amongst member countries.”

He, thus, advocated the implementation of deliberate measures aimed at enhancing trade and business collaborations between Ghana and Cape Verde.

“We should also try to increase the volumes of trade between our two countries, as this would create jobs, as well as boosting incomes for our two peoples. We should endeavour to establish direct flights between Accra and Praia to avoid going through Casablanca, in Morocco, for instance, before we can reach each other,” President Akufo-Addo said.

He continued, “We should also try to establish direct shipping lines, linking Accra to Praia, to facilitate trade between us. We need to push for the Sealink and ECO marine initiatives to help link our two countries. We should, as rapidly as possible, establish a Permanent Joint Commission for Co-operation to serve as the legal framework for addressing the trade and investment concerns of our two countries.”

To President Foseca, President Akufo-Addo was hopeful that “during our respective tenures of office, it is my desire that Ghana and Cape Verde continually search for ways to co-operate. I have no doubt, that, together, we can forge a new, strong partnership for cooperation between our two nations for the mutual benefit of our two peoples.”

In reiterating his commitment towards strengthening ECOWAS, President Akufo-Addo was certain that “for a marked improvement in the welfare of the 350 million people currently living in the 15 member states of ECOWAS, I believe it is extremely important that we, the leaders, demonstrate strong political will to make the community an economic and political success, and make the project of integration real.”

With West Africa’s population set to hit 500 million people in 20 years from now, up from the current population of 350 million, he stressed that “this could be a large regional market, which could present immense opportunities to bring prosperity to our region with hard work, enterprise and creativity. The time for West African integration is now. Together, all ECOWAS member states should show real commitment towards converting ECOWAS into a true regional market.”

President Akufo-Addo also commended his Cape Verdean counterpart for the strong leadership he had exhibited ever since assuming the reins of government in 2011.

“You inherited a challenging macroeconomic situation, but the proof of the turn-around of the Cape Verdean economy is evident in the projected growth rate for 2016. By encouraging private sector participation in the economy, and improving the key macroeconomic indicators, your country’s growth rate more than doubled, from 1.5 percent in 2015 to 4 percent in 2016,” he stated.

The establishment of a market economy and the development of Cape Verde’s tourism industry, amongst others, President Akufo-Addo noted, contributed to President Foseca obtaining 74 percent of valid votes in the October 2016 polls, describing it as “a clear testament of the confidence your people have in you. You are doing something right, Mr. President. Long may it continue!”

GUTA cautions  warns of increased prices of goods at Christmas