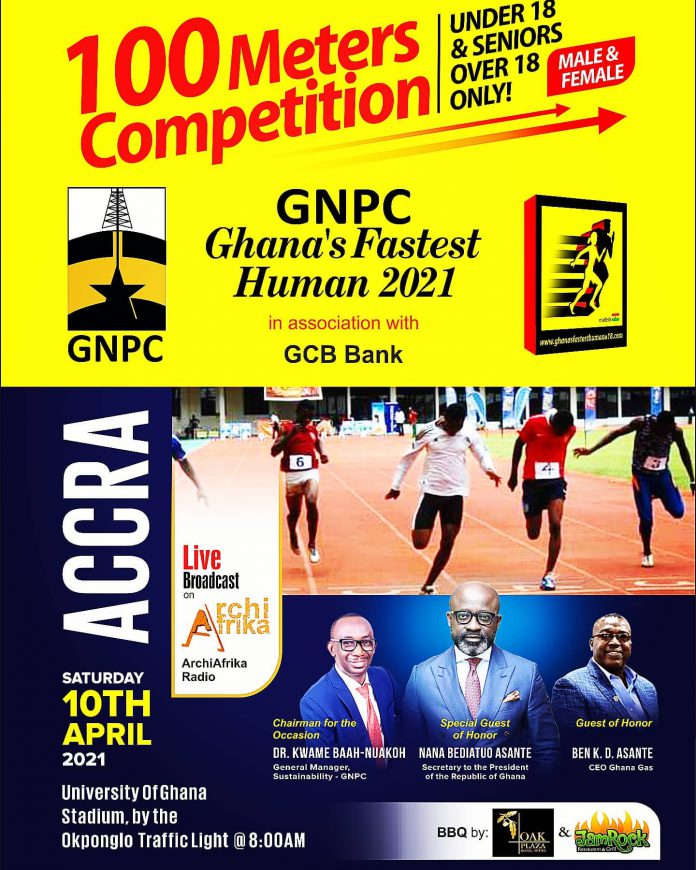 The GNPC Ghana’ Fastest Human Competition is back to the University of Ghana Stadium in Accra on Saturday April 10, 2021.

The current most exciting athletics competition in the country, GNPC Ghana’s Fastest Human comes to the capital city, after the first in the season at the historic city of Cape Coast.

Student sprinters in the schools and colleges, as well as individuals in the communities who believe in themselves are invited to participate and compete.

According to the organisers, all Covid – 19 safety measures and health protocols will be put in place.

They said the second competition which comes off at the University of Ghana, Legon for the Accra Edition on Saturday April 10 is expected to be a thriller, then the third is scheduled for the Paa Joe Stadium (KNUST) on Saturday May 1, 2021 if there is no hitch in the planning and preparations.

The competition is also for young males and females under 18 and over 18 sprinters. and 200 meters has been added. At stake at the grand final is President Nana Akufo Addo’s cup.

The GFH competition which intends to unearth top sprinters for Ghana to participate in the Olympic Games is sponsored by GNPC, Adidas, GCB, Kriate Lync, Wrenco and Global Media Alliance.

Mr. Reks Brobbey, an Olympian is the brain behind the competition which has produced Ghana’s current best sprinter and 100 meters record holder, Benjamin Azamati.

He is also the Deputy Operating Officer of the Local Otganising Committee of the 2023 African Games to be hosted in Ghana.

He said the event will be reported live radio by Joe Addo and his ArchAfrika crew, plus amazing grills on offer by Elizas Jamrock restaurant.