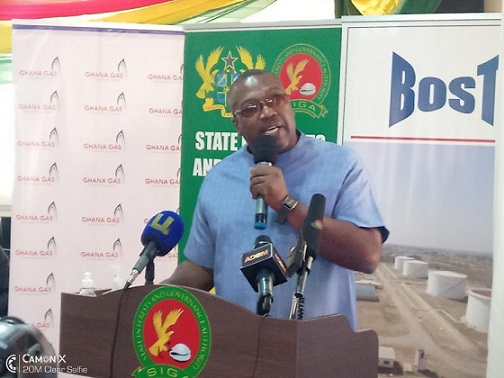 He said the new facility would be cited north of the current Plant at Atuabo in the Western Region.

Dr Asante said they were also looking at installing a 278km gas pipeline onshore between Takoradi and Tema and that, “Takoradi and Tema were the two critical load centres in terms of gas demands and it didn’t make sense to rely on one pipeline operated by a third party.”

Dr Asante said this when he took his turn at the maiden weekly media engagement series for State Owned Enterprises (SOEs) in Accra.

The programme, organized by the State Interests and Governance Authority (SIGA), is aimed at enabling the SOEs’ CEOs share their success stories with various stakeholders and the citizenry.

Over the years, SOEs and other specified entities had received significant investments from the Government to be profitable and to contribute to the overall economic prosperity of the country.

Many of the SOEs were able to turnaround their business operations over time through good leadership and best business practices despite the negative impact of the COVID-19 pandemic.

Concerning the Prestea-Kumasi Gas Pipeline Project, which is 60 per cent complete, Dr Asante said the project when completed would enable them to supply lean gas to Nyinahin and Kumasi for mineral processing and power generation.

He said the government was seeking to make Kumasi another hub of power generation and there was a Mainline Compressor Station at Atuabo-a third unit-coming on board to increase the (gas) capacity.

He said efforts were also underway for another gas pipeline in Ivory Coast to enable them deliver gas to that country.

Dr Asante noted that the distance from the Gas Processing Plant at Atuabo to the Ivory Coast boarder was about 52 kilometres, whereas Ghana’s nearest demand point (Takoradi) was 111 kilometres away; adding that discussions were ongoing between the two countries towards the execution of the project.

Dr Asante said Ghana Gas was also working with the Ministry of Food and Agriculture to use the nation’s indigenous gas to produce fertilizer, with the plant to be located at Domunli to produce 400,000 tonnes of Urea and Nitrogen Phosphorus Potassium (NPK) fertilizers.

Dr Asante said the Company would be citing a Liquefied Petroleum Gas (LPG) Bottling Plant in Axim and that six licenses were released by the National Petroleum Authority (NPA) towards the execution of that project.

He said the LPG Bottling Plant would provide safe LPG bottles and bottling plants to improve LPG handling safety and their vision was to be an integrated and reliable gas services Company.

He said the Company would contribute to Ghana’s industrialisation process by installing and operating gas infrastructure required for gathering, processing and delivery of natural gas resources to the market in a safe, cost effective and environmentally responsive manner.

Mr Stephen Asamoah-Boateng, Director-General, SIGA, said the Authority wanted the SOEs to engage Ghanaians through the media to let them know their achievements and challenges.