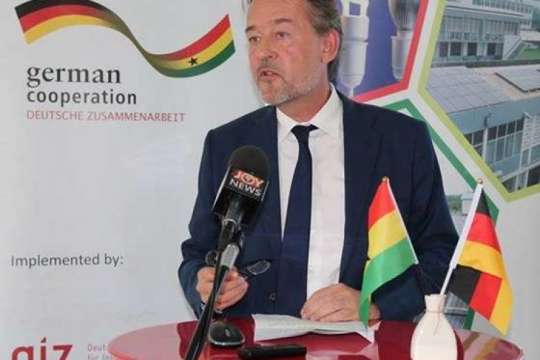 The 400 kilowatt facility, known worldwide as the ‘Hybrid-PV- Biogas-Pyrolysis-Plant’, has the capacity to convert 12 tons of waste into bio fertilizer and energy daily and is being funded by the German government.

It is seen as one of the remedies to Ghana’s waste management and power generation challenges, while generally reducing the health hazards from pollution and climate change.

It would also aid in waste reduction, diversify energy sources and supply, and create jobs for more than 50 people.
The German Ambassador said the gesture was in fulfilment of a promise made in July last year by Ms Anja Karliczek, the German Minister for Education and Research.

This was at a West Africa Science Centre in Climate Change and Adapted Land (WASCAL) Ministerial Conference in Accra.
Mr Retzlaff said the project signified that Ghanaian and German research institutions and enterprises, had found a single innovative solution to the different issues of waste management and power generation in utilising the world-wide unique plant.

Professor Frimpong Boateng said the construction of the plant, comes with other benefits such as research, improved sanitation, job creation and ginger processing, as it also boosted collaboration among the Council for Scientific and Industrial Research (CSIR), four universities and five ministries.

He urged the community members, especially the youth to be disciplined, morally-sound and hardworking to attract more investors in that sector, to help achieve the intended goals.

Mr Michael Amoah Awuku, the Municipality’s Chief Executive (MCE), commended the WASCAL, CSIR and the German Government, for the innovation and support for the project.

Nana Adu Mensah Asare, Amakomhene, who chaired the function, commended the stakeholders and appealed to other donors to emulate the support.

Present at the function were representatives from the Local government, Sanitation and Energy Ministries, the German University of Rostock as well as Mr Emmanuel Agyei Anhwere, Member of Parliament (MP) for the area.