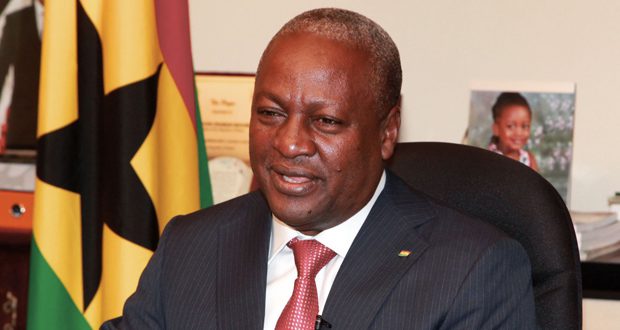 From George-Ramsey Benamba, GNA Special Correspondent in London, United Kingdom.
President John Dramani Mahama on Wednesday said Ghana was the best destination for investment, on account of political stability and peace the country has enjoyed since independence.

Apart from peace and political stability, Predident Mahama said: “Ghana is ranked seventh on the Mo Ibrahim Index on Governance, and I know we have all it takes to make investment achievable.”
President Mahama made these remarks when he addressed an international business community in London, as part of his four-day official visit to the United Kingdom.
The programme which was at the behest of the Ghana Investment Promotion Centre (GIPC), and the Royal African Society in London, outlined to the international communities, the investment opportunities in Ghana in the coming years.
It would also help in outlining President Mahama’s development agenda of adding value to raw materials, by investing in processing, instead of the current state of wholesale exportation of raw materials that was not fetching adequate revenue for the country.
It was also attended by Dr EKwow Spio-Garbrah, Minister of Trade and industry, Ms Hannah Tetteh, Minister of Foreign Affairs, Mr Fiifi Kwetey, Minister of Food and Agriculture, and Mr Seth Terkper, Minister of Finance.
Others were; Dr Raymond Atuguba, Secretary to the President, Mr Kwame Tinkorang, Director of Protocol, Ms Mawuena Trebah-Dumor, Chief Executive Officer of GIPC, and Mr Victor Smith, Ghana’s High Commissioner to the United Kingdom.
President Mahama said, although Ebola virus disease was currently casting a slur on the reputation of West Africa, Ghana was doing everything possible to ensure that the disease was not experienced in the country.
The President said Ghana had also been a trail-blazer on the African continent, since the independence era, through the struggle for independence, and now democratization.
He said under the new development agenda of Ghana, government was creating partnerships with other governments and the private sector within the country and beyond, hence the need for international collaboration.
On the Ebola virus disease, he said, it was no longer a West African disease, but an international challenge, as it transcended geographical and political boundaries of the African and other continents.
President Mahama gave the assurance that government would do everything possible to protect both new and existing companies to expand, to serve on their missions and objectives.