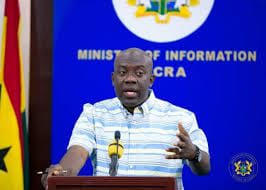 Government has asked Ghanaians to remain calm and disregard the declaration of independence of the Western Togoland by a Volta Region-based Homeland Study Group Foundation.

A statement issued and signed by Mr Kojo Oppong Nkrumah, the Information Minister, said the security agencies were in firm control of the country’s territory and taking the necessary measures to ensure that persons involved with the illegal act were dealt with according to the law.

The statement said Ghana remained a sovereign state, which has not ceded any part of its territory to any person or group of persons.

On Saturday, November 16, the Leader of the Homeland Study Group Foundation (HSGF), Mr Charles Kormi Kudzodzi, announced on its social media platform the independence of the Western Togoland from Ghana.

The group has been championing the separation of the Volta Region and some parts of the Northern, North East and Upper East regions from Ghana.