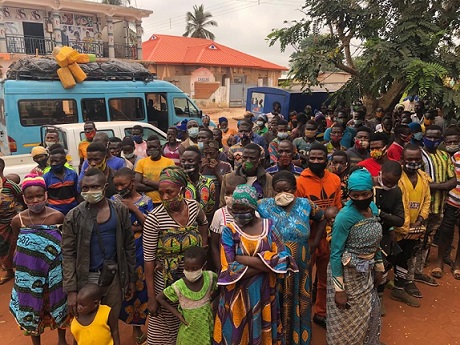 The Ghana Immigration Service (GIS) search team in the Bono Region has arrested about 80 migrants who entered the Region through unapproved routes.

Mr Enock Abrokwa Annor Assistant Immigration Officer, in charge of the Regional Command of the Ghana Immigration Service said the team made up of intelligent search engines came across the people suspected to be Togolese and from other Neighbouring African countries.

He confirmed with the Ghana News Agency (GNA) on Wednesday at Techiman that the people managed to enter the region even though all the boarders in the country were closed as a result of the COVID-19 pandemic.

said the Service would continue to go strictly by the state rules to deal with any group or individuals that use Ghana as their transit point to other neighbouring country.

Mr Annor expressed worried about citizens of the neighbouring French speaking countries who mostly travel without valid travelling documents and due to that they always use unapproved routes which were totally against the travelling rules and ethics.

He disclosed that the GIS in collaboration with the Ghana Police Service (GPS) and other state securities arrested some group of persons this year who intended to use Ghana as their transit and have since been deported back to their respective countries.

Mr Annor called on migrants from neighbouring countries to secure legal travelling documents before arriving in the country Ghana, as the Ghana Immigration Service was very committed in securing the country borders adding that the service was vigilant and would not hesitate to arrest and repatriate anyone found using illegal route into the country.