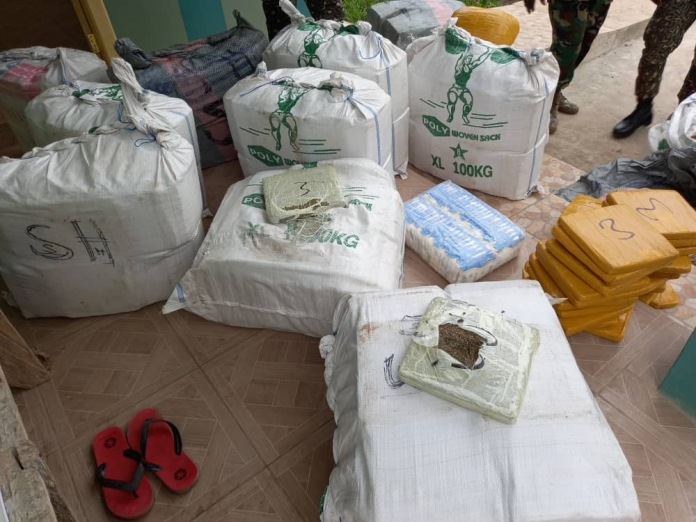 The parcels, which were in oval and square shapes were intercepted after a tip-off.

Assistant Superintendent Odoi Jeffery Nii Laryea, Commander, GIS Wli Afegame Border Post in an interview with the Ghana News Agency (GNA) disclosed that the parcels including a set of diapers were found in a green Toyota Hiace with registration number GN 5733-18.

He said officers were on patrol on Sunday, when they received a call at about 2115 hours from a source that a vehicle they suspected was carrying contraband goods.

The Commander said they had reinforcements and proceeded to the scene at about 2230 hours.

He said the officers opened and checked the vehicle in, which they found the parcels.

The Commander noted that they also informed the chief of the town of the operations.

The Toyota Hiace vehicle was travelling from Ghana to Togo using the Wli Todzi route was intercepted.

The Commander said no information was known about the occupants of the vehicle since they were at large.

The Assistant Superintendent urged the public to avoid acts of dealing in dangerous substances adding that anybody caught with such would face the laws.

The parcels were counted in the presence of officers of the Ghana Armed Forces, National Intelligence Bureau (NIB), Ghana Police Service and Ghana Immigration Service (GIS).

The Wli Border GIS about four months ago intercepted 164 parcels of narcotics around Gbledi.

A vehicle inspection report from the intercepted vehicle dated 26/09/2019 sighted by the Ghana News Agency was in the name of one Samuel Asempah as the owner.

In a related incident, the Honuta Command of the Ghana Immigration Service on Friday, at about 1150 hours, intercepted 1,550 parcels of suspected dried leaves in the semblance of cannabis at the Klave border enclave.

According to Assistant Inspector, Mr Felix Klu-Adjei, Volta Regional Public Relations Officer of GIS briefing the Ghana News Agency, Superintendent (Supt), Mr Bernard Kojo Nketiah, the Commanding officer of the Service at the Honuta Border, and his men made the arrest of the consignments upon intelligence.

He said the driver and his accomplices upon sensing danger in the arrival of the Patrol Team abandoned the contraband goods including a Toyota Mini Bus with a vehicle registration number, GG 2314-20.