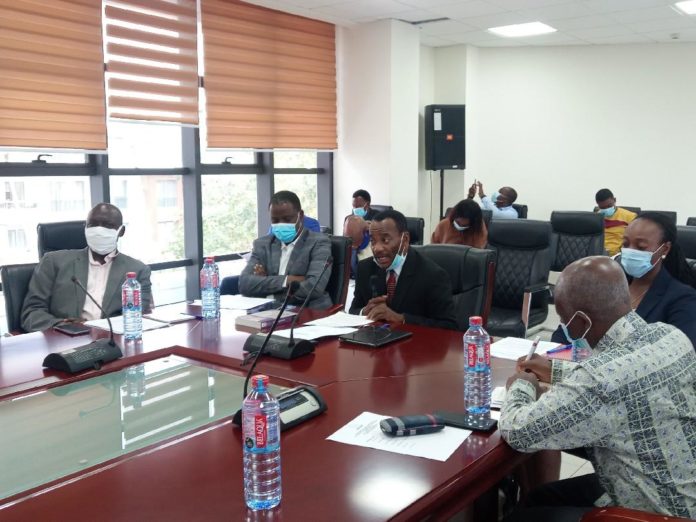 The Ghana International Trade Commission (GITC) has presented a report to the Minister of Trade and Industries on the alleged dumping of aluminium coils and circles originating in or imported from China.

Professor Paul Kuruk, Vice-Chairman, GITC, presenting the report to Mr Alan Kyeremanten commended the Minster for his advocacy in the establishment of the Commission to address unfair trade practices.

The Commission calculated a weighted average dumping margin of 35.77 per cent for the subject product.

He said a penalty of five years would be placed on the Company.

Prof Kuruk said the investigation was conducted within the framework of the GITC Act 2016, Act 926, and the GTIC Anti-Dumping Regulations (LI 2830) read with the World Trade Organisation Agreement on Implementation of Article VI of the General Agreement on Tariffs and Trade, 1994 (the Anti-Dumping Agreement).

He said the investigation was initiated after the Commission considered that there was prima facie evidence to show that the subject product was being imported at dumped prices and causing material injury and a threat of material injury to the Ghanaian domestic industry.

He said the Commission decided that the following definitive anti-dumping duties should be imposed on aluminium coils and circles originating in or imported from China: HS Codes 7606.91.10.00 – aluminium plates, sheets, strip, of a thickness exceeding 0.2mm.

He said material injury to the domestic injury was found to be in the form of the declines experienced by Aluworks concerning its sales volumes, market share, return on investment, productivity, incoming cash flow, growth and utilization of production capacity.

He said the Commission found Aluworks to be the sole manufacturer of aluminium coils and circles in Ghana and therefore, received the application as a complaint filed by the domestic industry.

He said under Section 54 of the GITC Act, 2016 (ACT 926), “dumping” meant the introduction of a product into the commerce of Ghana at less than its normal value in the ordinary course of trade, for the like product when destined for consumption in the exporting country.

He said at the initiation of the investigation, the known exporters of the subject product, importers and interested parties were sent questionnaires to complete.

The Vice-Chairman said the trade representatives of China at the Chinese Embassy in Ghana were also notified of the Commission’s investigation.

Prof Kuruk said the investigation period for dumping was from May 15, 2019 to March 13, 2020, stating that the injury analysis involved evaluation of data for the period January 2014 to December 2018.

Mr Kyeremanten acknowledged receipt of the report and commended the leadership of the Commission for their excellent and professional work on the report in addressing unfair trade practices in the local market.

He said as a country “we have embarked on a very comprehensive and aggressive programme for industrial transformation, which effectively meant that we are enhancing local production capacity and productivity.

He said any effort at having unfair trade practices in the economy would undermine the work the country had done so far in encouraging and supporting local industries.

“I believe that the work the Commission is embarking on will protect the local industries from unfair trade practices,” he said.

The Minister said the establishment of the African Continental Free Trade Area would be the most powerful stimulus for attracting investments not only into Ghana but to the whole Continent.

He said particularly for Ghana as a host country “we believe that this offers an opportunity for Ghana to become the new gateway and manufacturing hub for the Continent.”

He said in that respect the work of the Commission would be used to assure investors, who would be attracted to locate their facilities in Ghana to take advantage of the Continental market.

He said the work of the Commission would provide the eco-system to guarantee them against unfair trade practices that would be occasioned by people who would engage in the unfortunate exercise.

He expressed the hope that the Commission would continue with their work and the government was committed to supporting their activities.