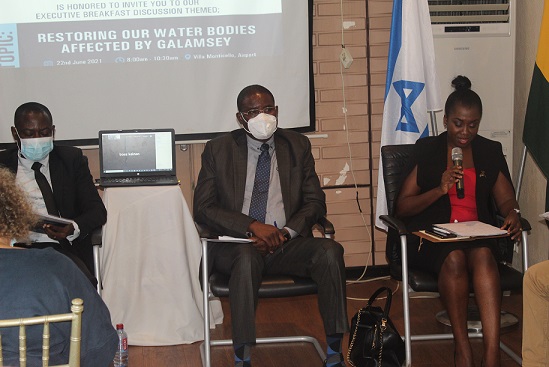 Dr Clifford Braimah, Managing Director, Ghana Water Company Limited, says the country has adequate water for the citizenry and there is no plan to import water to meet the needs of the population.

He said the sustainability of the country’s water resources was hinged on how well the citizens managed the water without further destruction or pollution through the activities of illegal mining.

The Managing Director said this at a breakfast discussion on the theme, “ Restoring Our Water Bodies Affected by Galamsey,” organized by the Trade and Economic Mission, Embassy of Israel Ghana, Liberia, Sierra Leonne and the Ghana Israel Business Charter.

He said while the population was growing, the demand for water increased and stressed the need to harness the water resources to maximize the benefits for sustained growth.

“There will be a percentage of water shortage if we do not manage the water well. There are millions of cubic water running into sea”, he said.

The Managing Director said even though Ghanaians had the right to basic quality water, such privileges also went with responsibilities, calling for a concerted effort to address the challenges in the pollution of water bodies.

He said the activities of illegal mining had reduced the volumes of water distributed to communities, adding that the company as at April, 2021 had witnessed a 38 percent of water losses.

Dr Braimah noted that the cost of operations for the company had gone high due to the activities of illegal mining, using more chemicals for water treatment, leading to high cost.

Mr Yaw Atta Arhin, CONIWAS and WASH, said the country had enough water resources but had failed to protect the resources through pollution and degradation.

He called on authorities to strengthen institutions to enforce laws on illegal mining to safeguard the country’s water from further pollution.
Dr Abena Antwi Asomaning, Managing Director, Africa Environmental Sanitation Consult, said the country must focus on long-term effects on inadequacy of water in households, since most citizens are challenged in that sector.

Mr Ayelet Levin Karp, Head of Trade and Economic, Israel Embassy, said Israel was 60 per cent desert but due to robust investment in treatment management, the country now exported water to its neighbouring countries.

“Israel has become a water empire because of intensive education to its citizens, water management and planning, national discussions devoid of politics and deployment of modern equipment,” he said.