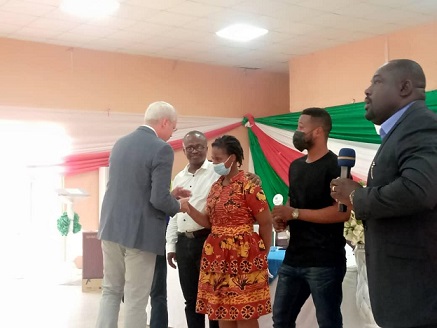 The Ghana Manganese Company Limited (GMCL) at Nsuta Wassa in the Western Region has honoured 42 of its staff who served the company for 25 years.

Each of the awardees received a citation and a 50- inch LG plasma television.

Mr Jurgen Elgendaal, the Managing Director of GMCL, congratulated the awardees for contributing immensely towards the growth of the business.

He said the GMCL employee long service award was instituted to recognise the tireless contributions, dedication and commitment of staff, which had sustained the company since its establishment.

He said although the business had encountered some challenges, they were the only company in the country that had exported manganese for over 100 years.

“Exploration drilling is something the company has not done for a long time, we will start very soon and these are very exciting moments,” Mr Elgendaal said.

“We are here to give away the awards to our workers who for 25 years have provided dedicated service through thick and thin to the GMCL. It is not too long ago we suffered one such war and God willing we are all in so we have a cause to celebrate such gallant people” he said.

Mr Onuawontor said the GMCL had always provided its workers with a healthy and safe environment to help them grow, be it on-the-job training or academia.

“The company has also given equal opportunities to all workers to help them realise their potentials and get ready to face the corporate mission, which is to be an internationally successful operating mining company undertaking safe mining practices combined with cost effective production,” he said.