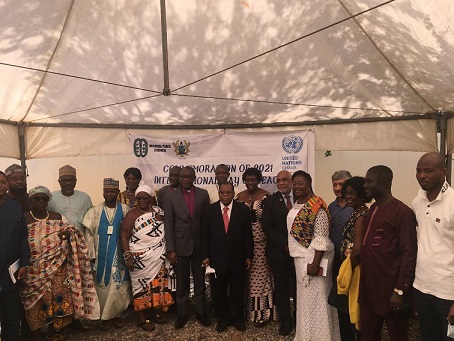 Mr Charles Abani, the United Nations (UN) Resident Coordinator, Ghana, has advised Ghanaians not to take the peace being enjoyed in the country for granted.

He said there were countries who through complacency had experienced the consequences of taking their peaceful state for granted.

“I have often said Ghana is such a peaceful place, but please don’t take this peace for granted. There are many countries in the region who know the consequences of taking their peace for granted,” he said.

Mr Abani gave the advice on Tuesday at the Commemoration of the 2021 International Day of Peace in Accra.

The occasion was organized by the National Peace Council (NPC) and United Nations Ghana with support from UNESCO.

It was marked on the theme: “Recovering Better for an Equitable and Sustainable World”.

He said peace was fundamental to everything and was the rocket fuel of development, adding that, the presence of peace fuelled development and the absence of it stagnated development.

Mr Abani said a peaceful society was one that promoted justice and equality for all and a just society should ensure that the systems that promoted equity were facilitated.

He noted that Ghana had a very stable peaceful architecture and that the Government of the day was one that appreciated peace.

Mr Abani commended the NPC for their efforts towards the promotion of peace in Ghana, particularly the roles they played before, during and after the 2020 General Elections to calm the tension that was gradually erupting.

Reverend Dr Ernest Adu-Gyamfi, Chairman, NPC said it was the collective duty of every Ghanaian to protect the peace being enjoyed in the country.

Thus, he urged citizens to report any suspicious activity to the relevant law enforcement agencies for the necessary actions to be taken.

The Chairman said the issue of unemployment and the dwindling opportunities for the youth needed attention from all Ghanaians particularly Government and the business community.

He said the country had to create more job opportunities for the youth, some of whom, as a result of lack of job and other opportunities, had become vulnerable to insurgents who lurked around to foment violence.

Rev Adu-Gyamfi said Government’s Free Senior High School policy must be encouraged and supported by all peace-loving people in and outside the country, to get majority of young people educated with the skills to take up opportunities that beckoned them.

He said as the adult community endeavoured to create opportunities for the country, the youth equally had the responsibility to train themselves and respect leaders and authorities.

This, he said, was the sure way to protect Ghana’s enviable record of a peaceful nation.

“Ghana cannot be the job of the National Peace Council only. Neither can it be the job of the government or citizens only. It takes a concerted effort by all citizens, government, the business community, civil society groups our development partners and friends to build sustainable peace,” he said.

Nana Dr S. K. B. Asante, Board member of the NPC and a representative of the National House of Chiefs, said chiefs and traditional rulers played a critical role in the country’s peace architecture, by acting as agents of peace in the rural areas.

He said they adjudicated over disputes and saw to it that conflicts in their vicinities were curbed.

Nana Asante said Chiefs and Traditional rules would continue to remain non-partisan and devoted to the whole process of peaceful co-existence.