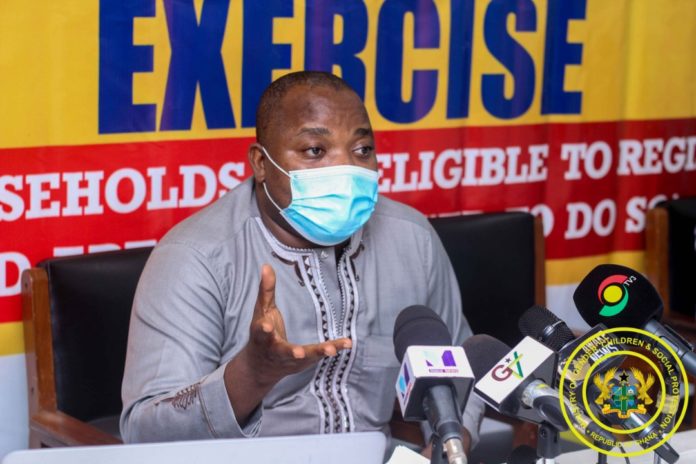 The Ghana National Household Registry (GNHR) data on about 80,000 poor and vulnerable persons in the Greater Accra region during the lockdown has shown that more than 60 per cent were homeless.

The government imposed a lockdown on the Greater Accra and Kumasi regions in April this year to control the spread of the coronavirus pandemic.

Consequently, the Ghana National Household Registry (GNHR), a unit of the Ministry of Gender, Children and Social Protection (MoGCSP), conducted a rapid data collection exercise on the poor and vulnerable to compile comprehensive, robust and reliable data for relief services during the period.

He said the compilation of such register involved the collection of information on the composition of socio-economic characteristics of households, adding that, upon completion it would serve as a database for the selection of beneficiaries for all social protection programmes in Ghana.

The data, presented by Dr Prosper Laari, National Coordinator, Ghana National Household Registry showed that 62 per cent of the approximately 80,000 poor and vulnerable persons were female with about 50 per cent aged between 18 and 39 while about 20 per cent were aged between 40 and 59; and 10 per cent aged 60+; and the remaining under 18 years.

He said the compilation of such register involved the collection of information on the composition of socio-economic characteristics of households, adding that, upon completion it would serve as a database for the selection of beneficiaries for all social protection programmes in Ghana.

“Over 60 per cent of vulnerable individuals sleep in kiosks, containers, markets, uncompleted structures, on the streets, bus or lorry stations, chop bars or drinking spots, and at the beaches, exposed to natural hazards. Only very few people sleep in compound houses, mostly in overcrowded rooms”, the report added.

The report showed that 2,630 persons live with disability and 39,199 are migrants, that is, individuals from other regions of the country.

The homeless with their children constitute 50, 266. Head porters, popularly known as Kayayes comprise 6,012, majority of whom are female and 1,033 were foreign nationals (mostly from neighbouring countries).

Also, the remaining who were not currently enrolled in school were mostly 64 per cent female. Reasons for which some of the children were not in school were either because they were homeless, or they were orphans or had no guardians.

Of the vulnerable individuals engaged in some livelihood activities, over 40% were petty traders or hawkers, about 5,000 (16.5%) were Kayayes or head potters, about 10% were drivers or drivers’ mate, scrap collectors, truck pushers, shoeshine boys, shop assistants and commercial sex workers.

The prevalent disability type was physical disability (50%), 20% visual impaired or blind and the remaining without any form of disability.

The data showed that over 50,000 of the vulnerable individuals aged 18 and above owned a mobile phone, more than half of this had registered for mobile money services.

Also, less than 50 per cent of the vulnerable individuals did not have access to National Health Insurance.
The rapid data collection exercise was funded by the World Bank and DFID and commissioned by the Ministry of Gender, Children and Social Protection.