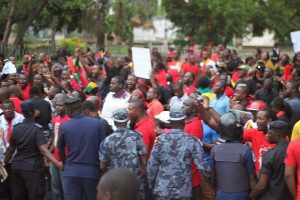 “I’m not an idealist or a heyday dreamer wearing some fanciful intuitions or a worshipper of Utopian bliss, I’m a radical socialist who believe in practical realism.

I believe in Revolution (intellectual revolution)

I believe in mental revolution, not arms or guns….a social revolution,a stage where the people can demand and hold leaders strictly accountable for their actions and inactions.

Here in Africa, we’ve gotten to a stage where wearing fine suits and flying ties has outlived it’s governance usefulness, that is no long a requisite for good governance rather leaders who are ready to take risks premised on the needs of their people.

NKrumah was not just an idealist, in fact the gentleman was a rendition of genius, he had foresight, vision and on top of all he believed in practical realism.

Why did NKRUMAH establish the Tema oil refinery, it was evident that Ghana by then had no prospect for oil discovery yet he saw the vision to establish TOR, it took over 30 years for Ghana to discover oil in commercial quantities…he was a visionary leader, someone who never sought immediate gratification but rather put much effort in long term investments.

Our leaders of today, counting from the inception of the fourth republic, which is 25 years old. What has been the ideology of any of our presidents aside the usual talking crises we face. They rise to power lying through their teeth, deception is a charm in Ghana politics.

Over the years, we have had difficulties implementing long term policies, even medium term plans has been a problem, we build roads at hiked cost which get ravaged by potholes after few months later, there hasn’t been any proper supervisory role to Checkmate contractors or people enthrusted with the responsibility of serving the people, because the person awarding the contracts will end up asking for almost half of the money required to build the road,what will be left to build a

road that can stand the test of time, this is

corruption choked society, a country full of hypocrites and enemies of humanity.

Every facet of our society is bleeding, from the public service, to the alters of God, state corporations and institutions, the legislature is a comedy theater, in the executive setup, stealing is legendary, the judiciary in Ghana is worse, we have had incidents where judges swapped justice for “aponkye”and some paltry amount and ended liberating hardened criminals to tail the society.

In Parliament, it’s quiet ridiculous, l believe that even as individuals because we all have different academic, religious and ethnocentric orientations we are likely to have deferring views on issues whenever they come up, it will be quiet disingenuous to have everybody in a particular political taking the same stance on national policies at all time to them, it doesn’t matter whether such issues bear national interest or not, as long as their common gains are guaranteed, it’s cool.

Ghana’s Parliament is reduced to a comic theater where all forms of political anathemas get rounded up.

Issues bearing national interest comes upand despite the differences in academic, ethnocentric, religious orientations, always and always, the House end up dividing into Npp,Ndc usual politics, so the question that comes up naturally is simple, are these people really independent at all even in their thinking? This is the reason Ghana is stucked in poverty, morroring the past, it’s same Ghana, that a point in history helped countries like South Korea and several other African countries, we were ahead of countries like Malaysia, Singapore but because of mismanagement and total disregard for equity and fairness, Ghana is still in tattered penury.
The answer to why we are still in economic quagmire, it’s simple, greed and selfishness.

In Africa, those in power are very rich, they hold on to both political and economic power and use that influence to terrorise their own people and sell them into economic subjugation, they enslave the gullible masses, turn them into baggers, in an occasion you get help from them, they drag you into the pit of servitude, that’s where you sacrifice your soul for a single dollar.
Ghana reverted to constitutional democracy after the country had witnessed episodes of blood bath in the form of military cleansing in the face of malicious power struggle, the aim was to offer sustainability and guarantee of tenure for prospective governments, they system brought forth, multi party democracy which paved way for diverse opinions and policy

alternatives for government in power aside checkmatting abuses and corruption.

the years, in Ghana, parties have arrogated to themselves the power of suborteurs, emitting malicious energies to impede. A typical Africa politics, unlike in the States where opposition parties are often found on same page with government in policy formulations and its implementation for the good of America, it’s different here in Ghana, how dare you take a stand against your party or government, if you don’t agree, just shut up.

In 2012, after the election which the NPP lost,we had a top apparatchiks from their ranks who made a treasonable comments “we will make this country ungovernable for John Mahama”, low and behold the Npp in the entire 4 years did everything to malign and strip John Mahama’s administration of its integrity through a system they design called “regime change” which was led by the mainstream media giants, the clergies and Reverends in political cassocks wearing barges of hipocrisy.

Again we have succeeded in designing a system that routinely privileges the non-meritorious criteria instead of merit, people who have what its takes to help government policies achieve its purposes for one reason or the other are pushed out through the window and we’ve ushered in celebrated sycophants tied to the aprons strings of party interests and those in authority, Presidents always look for people they can control, manipulate to satisfy their insatiable craves for wealth to the detriment of the masses they’ve sworn an oath to serve and protect at all time.

It’s only in Africa where leaders are not supposed to serve, but Scramble for wealth.

At the moment, mention one African leader serving his people and l promise to stop writing.

But despite the bleak that hovers the space,giving us the impression of doom and hopelessness, we can chart a new path but only if we are ready to swap greed tendencies for collective priorities, that is, if we are ready to serve the people with good heart and intentions.

Welcome to my country Ghana, where even pastors and self-acclaimed “men of gods” are bunch of hypocrites, a country where pastors are richer than a pinnacle politician but Church member are as poor as church rat.

We shall overcome this modern day slavery, the Bible is my witness.