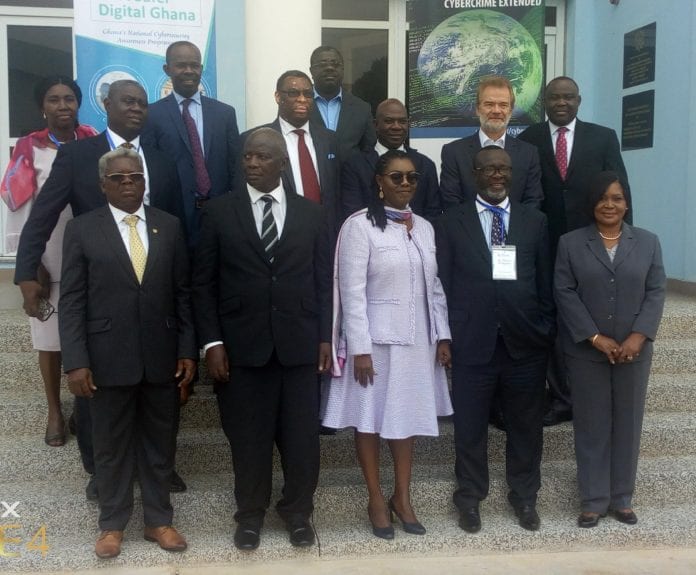 The Minister for Communications, Ursula Owusu-Ekuful (MP), and the ‘Enkosuohemaa of Akyem Asuom’, has indicated that in addressing cybercrime and cybersecurity challenges, Judicial capacity building was key.< She explained that, the Ministry of Communications in collaboration with the Council of Europe under the GLACY+ Project have undertaken a number of Judicial Training Programmes for Judges especially those with the financial Courts. The Minister therefore noted how the trainings have enhanced their understanding especially in the application of law to cybercrime cases. "The Electronic Transactions Act, Act 772 (2008), and to a certain extent, the Electronic Communications Act, 2008 (Act 775) are two primary legislations enacted to be applied to cyber offences in Ghana. There are also other pieces of legislation in our body of laws which can assist in all manner of cases and not just in cyber offences," She noted. Mrs. Owusu-Ekuful, however underscored the need for a better understanding and appreciation of digital evidence in order to support Judicial determination of cybercrime cases. She was speaking at the formal opening of the Judicial Training on Cybercrime and Electronic Evidence for Judges of the Supreme Court, as part of the 2018 National Cyber Security Awareness Month (NCSAM) at the Kofi Annan International Peacekeeping Training Centre (KAIPTC), on Tuesday 23rd October, 2018. She said, cybercrime had become one of the most common but pervasive crimes that Ghana has been experiencing of late. Meanwhile, she said Ghana had undertaken a number of initiatives aimed at formalizing the economy through digitization. Some of which were the paperless port, national identification system, national property addressing system, mobile money interoperability system, e-procurement and e-justice project which seeks to digitalize the work of the Judiciary in the administration of Justice. Mrs. Ursula Owusu-Ekuful, indicated that, the private sector including telecommunications and the financial sectors had also seen major lead in internet connectivity and digitization, where in the first week of March 2018, MTN alone announced a revenue jump of 23.3% and GH 9.3 million daily revenue with 7.1 million active mobile money subscribers. And she said, there were 6.5 million active data subscribers on that network according to www.citifm.com on March 14th, 2018. However, the Minister intimated that, "part from the various forms of cybercrime such as cyber fraud that we all know, the role of computers and the internet in facilitating other contemporary and emerging crimes including human trafficking, drug trafficking, terrorism and money laundering cannot be overlooked. Our country's significance strides in ICT development is being undermined by the growing menace of cybercrime and therefore capacity building is urgently required to address these trends." According to her, "Section 7 of the ETA addresses the issue of admissibility of digital evidence and it is my belief that, this workshop will contribute to Judicial understanding especially in relation to technical considerations in the admissibility of digital evidence." The Minister also indicated that, Ghana's accession to the Budapest Convention was borne out of a practical Judicial imperative, thus the need to be able to facilitate cross border investigations and prosecutions of cybercrime cases especially at the time when our citizens are actively using digital services and platforms such as Facebook, WhatsApp and Instagram which were hosted in other jurisdictions. She further revealed that, research shows that Judge's understanding of information technology, cybercrime issues as well as matters pertaining to digital evidence affects their ruling on cases. This she said was so, because the domain of cybercrime was relatively new to the Courts. The Communications Minister, however stressed on the need to build capacities in these areas in order to enhance the country's Justice Delivery. She also emphasised on the just commenced e-justice programme, which she said must be borne in the minds of all Actors, Judges, Staff and Court users to be very conscious of cybersecurity. Adding that, "A breach of the system or data would have very serious implications. In this regard, the Ministry of Communications, through the newly established National Cyber Security Centre (NCSC) will further engage with the Judicial Service to provide cybersecurity training for staff of the Judicial Service towards a cyber secured culture among employees of the Judicial Service." On his part at the opening, Supreme Court Judge, Justice Gabriel Scott Pwamang, in his remarks said Ghana has chosen to join the rest of the majority of people all over the world. Saying, "We live under democratic transparent constitutional government, therefore, any activity be it the fight against crime, cybersecurity, criminal activity of any kind, has to be investigated, prosecuted and determined in accordance with law." Emphasising that, any investigative body which is investigating cybercrime, has its eye on what will happen when a culprit is found and arrested and taken to court. This he said was because the democratic principle if the executive, which will do the investigation cannot try the culprit. "So that is why I think it is very very critical and very very thoughtful for the organizers of this section to have interaction with Judges, in order to get their perspectives and also to share with them the latest trends in cybersecurity and cybercrime," he added. "Now when a matter also ends up in court, it may start from a lower court but, eventually, it's the supreme court which has the final say. And it's the supreme court which defines policy for law enforcement as far as the Judiciary is concerned. That is why k think the organizers have done a very critical job in targeting the supreme court for this interactions. Because, then, we will all be on the same page as far as cybercrime is concerned and as far as enforcement of the regulations that will come," Justice Pwamang said. Prominent among the Judges were; Justice Charles Edward Ekow Baiden, Justice of Criminal Court 2, Justice Paul Baffoe-Bonnie - Supreme Court, Justice Vida Akoto Bamfo - Supreme Court, Justice Julius Ansah - Supreme Court and to name a few.

Microsoft to Help Train, Hire 250,000 to Fill Gap in US Cybersecurity Skill

Chamber of Commerce in Takoradi receives training on Cybersecurity Act

SIGA to assess State-owned Enterprises on their responsiveness to cybersecurity