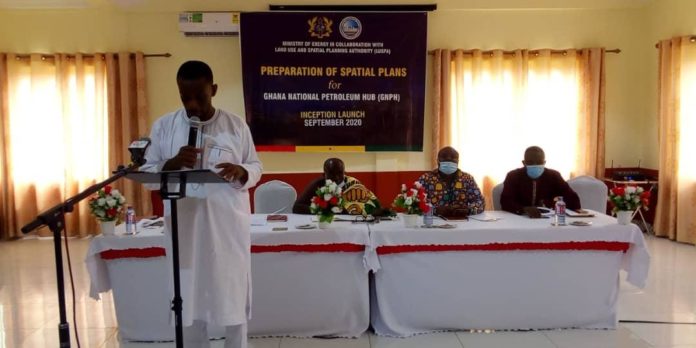 The Ministry of Energy (MoE) in conjunction with the Land Use and Spatial Planning Authority(LUSPA) has launched the preparation of spatial plans for the Ghana Petroleum-Hub project at Beyin in the Jomoro Municipality.

The project, which is expected to be completed in eight months’ time, is estimated to create about 780,000 jobs for Ghanaians.

A Deputy Minister for Energy,Mr.Joseph Cudjoe disclosed this at the inception launch for preparation of spatial plans for Ghana Petroleum-Hub and data validation workshop at Beyin in the Western Region.

The 20,000 acres of land Petroleum Refinery Project, estimated at a cost of US$60 billion, is one of government’s strategic programmes in the petroleum downstream sector to boost the economy.

The stakeholder engagement workshop was therefore to solicit views on the spatial use of land and key infrastructure in the citing of the petroleum hub, land settlement and compensations to avoid litigations with land owners.

Mr.Cudjoe said it was government’s vision to develop Ghana as a hub for refined petroleum products to the West African sub-Region and the continent.

The Minister who is also the MP for Effia,said the project was one of government’s strategic anchor initiatives that would serve as a new pillar of growth in the economy.

The project would further accelerate the growth of Ghana’s petroleum downstream sub-sector to make it a major player in the economy and ensure development of sustainable value, wealth creation and progress of the industry.

Mr.Cudjoe said the Ministry of Energy has presented the Petroleum-Hub bill to Parliament to give the Western Region the necessary legal backing for the project.

The Chief Executive Officer(CEO) of LUSPA, Mr.Lawrence Z.Dakura who gave an overview for the preparation of spatial plans for the Ghana Petroleum-Hub project, said the consumption of petroleum products across the West African sub-Region had increased exponentially with Ghana’s consumption alone at 3.3 million metric tonnes in 2016 and that of the West African sub-Region estimated at about 30 million metric tonnes.

He noted that “at a projected annual growth rate of about seven per cent, it is estimated that total consumption would most likely double and could peak at about 78 million metric tonnes by 2030 making the West African sub-Region the potential of becoming a huge market for refined petroleum products in the medium to long term.

Mr.Dakura however bemoaned that the requisite infrastructure to support the rising demand for petroleum products in Ghana was inadequate, adding that Ghana would provide a credible alternative lead in the sub-Region.

He said the establishment of the hub would not only attract substantial investment in Ghana to stimulate the economy, but would provide employment to people of the local area, provide the commensurate socio-economic infrastructure to improve the livelihoods of the people and also ensure the judicious use of land for the present and future generations.

He said the complexity and expenses of the petroleum hub dictated the preparation of a structure plan and a number of local plans to guide and coordinate orderly physical development to eliminate any conflicts in land uses that could have dire consequences on the environment and the people.

The CEO said the Petroleum Hub Structure Plan span a period of 15 years between 2021 and 2036 within which structure plan and local plans for the petroleum and petro-chemical hub would be completed.

Mr.Kwabena Okyere Darko-Mensah, the Western Regional Minister said expectations of the people in the region with the discovery of oil and gas a decade ago.

He said “the Petroleum Hub would have facilities such as oil refineries, a power generating plant, waste and water treatment plant, dedicated ports infrastructure as well as residential and office accommodation facilities as investments expected to transform the economy through export tax of about $1.56 billion by 2030, increase GDP by about 7 per cent and create jobs in excess of 780,000”.

He reminded people of the Region to acquire relevant skills and capabilities and reposition themselves to participate meaningfully “in this wealth creation along the value chain of the petroleum downstream sector and create the synergies as indigenous and local businesses”.

He commended the MoE and the LUSPA, chiefs, elders around the Bonyere traditional area for their guidance and immense support towards such an important national asset.

The Regional Minister assured people of the Region that the government would address their aspirations.