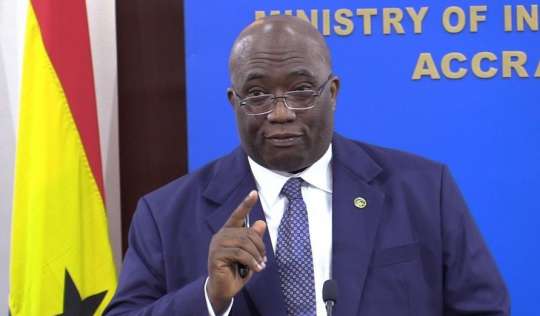 The Ghana Railway Company Limited has congratulated veteran politician, Hon. Joe Ghartey on his fifth consecutive election as Member of Parliament for the Essikado-Ketan Constituency in the Western Region.

There was a spontaneous wild jubilation across the constituency when Hon. Ghartey was declared winner.

In a statement signed by its Acting Managing Director, John Essel, the Ghana Railway Company Limited said “we know you’ve worked hard to reach this point and we are so happy that you’ve been recognized by your constituents for your accomplishments. It is well deserved.”

According to the statement, “we offer you our whole hearted support in your future endeavors as the sector minister of Ministry of Railways Development (MoRD), and we also hope for your personal future success.”

“You dreamed big, you worked hard and you have earned the recognition which came with your re-election,” the Ghana Railway Company told Hon. Ghartey.

“We are proud of you, of your accomplishments, and of the contributions that your leadership represent,” it said, adding that “you have our best wishes for your future success.”

Hon. Ghartey not only worked hard to win the parliamentary race this year for himself but also won the presidential election in Essikado-Ketan constituency for President-elect, Nana Akufo-Addo.

The veteran politician was first elected Member of Parliament for Essikado-Ketan Constituency In 2004 during the reign of former President John Agyekum Kufuor.

He moved on to retain the seat in 2008. In 2012, he won the seat for the third time. Again, through his servant-leadership and devotion to the wellbeing of residents of Essikado-Ketan, Hon. Ghartey won his fourth term bid in 2016.

And in 2020, despite series of smear campaigns from the opposition National Democratic Congress, some of which in the form of ‘paid for’ television documentaries, Hon. Ghartey has once again been re-elected.

His strong commitment to improving the livelihoods of his constituents continue to be rewarded in elections over the years, as shown in the outcome of the 2020 polls.

Hon. Ghartey, an experienced lawyer, former Attorney General and Minister of Justice, second Deputy Speaker of Parliament and a Christian by faith, is a role model to many young Ghanaian politicians, and he has over the years behaved himself very well in both public and private life.