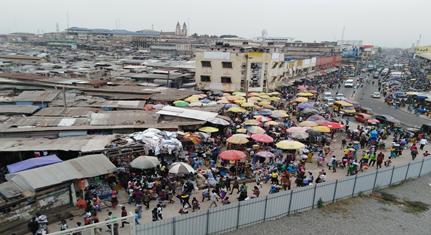 That means businesses would have to be relocated to allow the construction of the projects under the Ghana Secondary Cities Support Programme(GSCSP) to begin.

As a result, a Sod-cutting ceremony for the construction of about 102 lockable market shops and other facilities have been carried out.

The GSCSP initiated by the Ministry of Local Government and Rural Development under the sponsorship of the World Bank is to improve urban management and basic urban services in participating municipal assemblies in the country.

Mr. William Agyapong Quaittoo, the Member of Parliament for Oda constituency who is also the former Chairman for the Parliamentary Committee on the Local Government lobbied for the Birim Central Municipality to be one of the 25 beneficiaries of the Ghana Secondary Cities Support Programme.

He said, the project was in three lots that were awarded on contract with three construction companies and expected to be completed within 11 months.

Ms Victoria Adu, the Birim Central Municipal Chief Executive expressed joy that the Municipality was selected among the 25 beneficiaries nationwide and called on the contractors to use high quality materials to ensure durability.

Mr Samuel K Adu, the Chairman for the Market Management Committee said, initially the traders were inconvenienced for the relocation and expressed the hope that, the project ould benefit all.