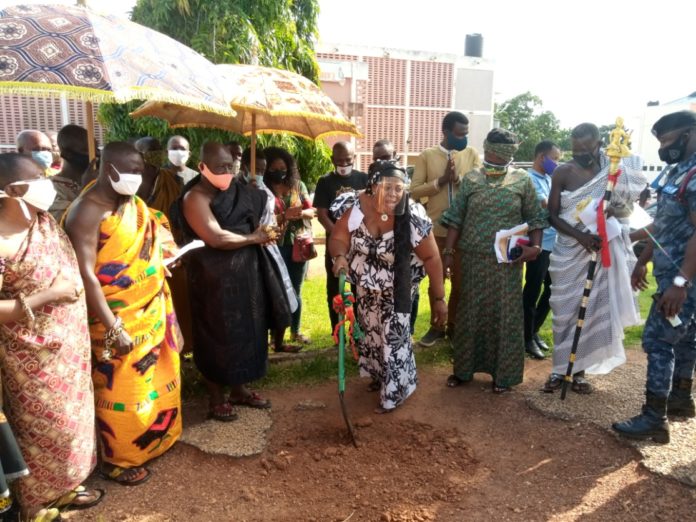 Mrs. Evelyn Ama Kumi-Richardson, the Bono Regional Minister, has performed separate ground-breaking ceremonies for work to commence on the first phase of construction, under the Ghana’s Secondary City Support Project in the region.

The US$100 million World Bank’s International Development Association (IDA) credit project is part of the government’s broader urban development and decentralisation projects in the beneficiary municipalities.

It will help to strengthen local systems and provide the needed support to the Municipal Assemblies for effective urban management and service delivery.

Three Municipalities in the Bono region, Sunyani, Berekum and Dormaa Central, were selected among 25 municipalities across the country to benefit from the five-year project.

Addressing separate durbars in Sunyani, Berekum and Dormaa-Ahenkro amidst social distancing, Mrs. Kumi-Richardson explained contracts had already been awarded and the government expected the people to cooperate with the contractors to enable them to complete the projects within the nine-month stipulated period.

The Berekum Municipality would also benefit from the implementation of a number of development projects, including; 20-units stalls, police post, two passenger waiting areas, toll booth and ticketing room, paving of 8,200 metre-square lorry park and a shed.

Mrs. Kumi-Richardson cautioned the contractors against shoddy works and advised the Assemblies to monitor the projects and support the contractors to execute excellent works.

Madam Justina Owusu-Banahene, Mr. Drissa Ouatara and Mr. Kofi Adjei, the Sunyani, Dormaa Central and Berekum Municipal Chief Executives respectively were happy about the projects, which they noted would add on to the many projects being executed by the government and pledged to be in regular touch with the contractors to facilitate speedy execution of the projects.