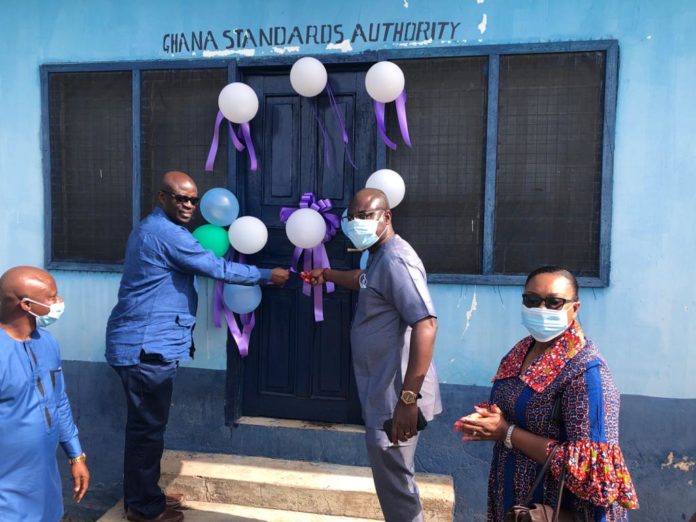 The Ghana Standards Authority has opened offices in some of the newly created regions as part of plans to have a nationwide presence and to make its services available at the doorstep of clients.

In this direction, a delegation led by Prof Alex Dodoo, the Director-General of the GSA, opened offices in Chache in the Bole District, in the Savannah Region.

There were a similar opening of offices in Damango, Nalerigu and Techiman.

Under Prof Dodoo’s leadership and in line with the Government’s vision, GSA has intensified efforts at decentralising its operations across the country.

The remaining new regions will be catered for early next year. The Authority already has offices in the existing 10 regions.

Speaking at a brief ceremony in Chache, Prof Dodoo noted that “the presence of this high powered delegation here should tell you how seriously we take this activity. It may look like a very small office, but it is symbolically very important.”

“We believe that once we are everywhere in the country like the Ghana Police, we will be there to protect people in so far as goods and services are concerned. So, it is our pleasure to have this office inaugurated formally.”

Prof Dodoo said the opening of new regional offices was an important step towards realizing the Authority’s vision of becoming an accessible, customer-focused world-class standards organization.

“This new service post will be the first of many important initiatives for the organisation to achieve its two-fold mandate of consumer protection and trade facilitation,” he said.

“Even though activity in this area is not very busy at the moment, positioning the office here is very strategic, considering that it is a border town, servicing as an access route to Côte d’Ivoire and vice versa,” he added.

Commenting on the development, Alhaji Yusif Sulemana, the Member of Parliament (MP) for the Bole- Bamboi Constituency, through whose instrumentality the office space was secured from Ghana Revenue Authority, expressed joy at having the GSA presence in the area and promised to assist the Authority in every possible way to fulfil its mandate.

The office is expected to generate new business, for which reason, Andrews Dery, the Officer in charge, has been given additional responsibility for the neighbouring communities.

GSA is an Agency of Government responsible for developing, publishing and promoting standards in the country.

It does this through standardisation, metrology and conformity assessment activities. Some of these activities are testing, inspection and certification. These activities ensure that products or goods and services produced in Ghana, whether for local consumption or for export are safe, reliable and are of good quality.