Many Ghanaian football fans could not make it to Port Gentil for the Third-Place Play Off between Ghana and Burkina Faso because the train developed a fault. 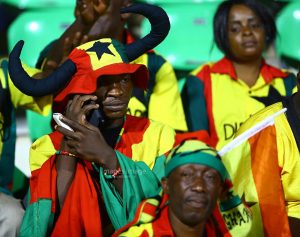 On a rainy day that the game was played, the Ghanaian supporters made up of Die Hard Supporters, Millennium Supporters, GHANSU and a few NSU devotees were highly demotivated and uninspired to return back to Port Gentil where Ghana played the Group games.

Abrahan Nkansah aka Apirigu Chakapama, President of the Die Hard supporters said some of them, the leaders wanted to travel to Port Gentil, but there was a major fault on the train that was supposed to move, so they could not make it and the Burkina Faso fans who had come in numbers took over the whole field.
According to Nkansah, like it happened in previous editions of the AFCON, the fans and the players were not motivated to play in the Third Place game.

He said this year’s Nation’s Cup had been a real adventure as they keep on moving from place to place by means of difference transports like buses, cars, boats, trains and plane.
He noted that the tournament was an eye opener for football fans to know that the game has developed and every African nation is capable of winning, but preparation and experience counts a lot.
Apirigu Chakapama said he was sad that Ghana did not go to the final, but was not surprised that Egypt and Cameroun went to the final.

He appealed to the Ghana Football Association (GFA) to make the local league attractive and competitive.
He also urged corporate Ghana to sponsor supporters to cheer the Black Stars because the players need the support and football is enjoyed better with fans.

On Avram Grant, he said the coach was a flop in his substitutions and he seem not to read the games.
“But I will be glad if the team is kept because they have great potential and the future is bright. We were 16 countries that competed and we placed fourth, but we could have done better” he added.

Dede Ayew Rules Cameroon To Be A Tougher AFCON Side