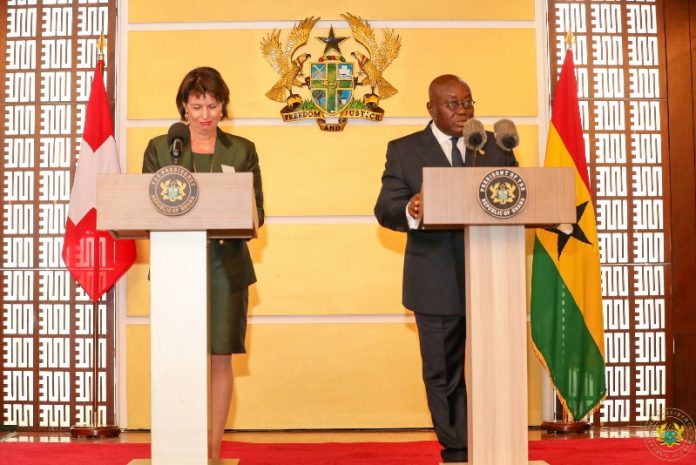 Ghana and Switzerland have agreed to expand co-operation and explore opportunities to boost the volume of bilateral trade for the mutual benefit of its peoples.

Thus, the two nations have committed themselves to undertake joint projects aimed at increasing cocoa production in Ghana and enhancing value addition to the commodity, and to improve the competitiveness of Ghanaian enterprises and diversify the economy.

This was the outcome of a bilateral roundtable when the visiting President of the Swiss Confederation, Doris Leuthard called on President Nana Addo Dankwa Akufo-Addo on Wednesday at the Flagstaff House in Accra.

The discussion culminated in the signing of a Memorandum of Understanding (MoU) between both sides to improve trade in gold and cocoa and investment in the sectors agriculture and pharmaceuticals. Both sides also held discussions in the areas of Foreign Affairs, UN Reforms, Finance and Security.

President Akufo-Addo, at a joint press briefing after the talks, said the two countries expressed the need to deepen bilateral relations, improve trade figures beyond the two commodities of gold and cocoa, which over a number of decades had constituted the backbone of trading relations.

He said his government was determined to pursue a systematic programmes aimed at adding value to the country’s cocoa beans.

“Ghana, under my presidency, will no longer become mere producer and exporter of cocoa beans. We will process more and more of our cocoa here in our country. There can be no future prosperity for our people in the short, medium or long term if we continue to maintain economic structures that are dependent on the production and export of raw materials.

“We intend to add value to our raw materials resources, industrialise and enhance agricultural productivity. This is the only way we can put Ghana at the high end of the value chain in the global market space and create jobs for the teaming masses of Ghanaians,” he said.

He entreated Swiss investors to take advantage of the growing business-friendly climate in the country to invest in Ghana, stating that government’s flagship policies of “One District, One Factory”, “One Village, One Dam”, and the “Programme for Planting for Food and Jobs”  held areas of opportunity for them.

The President said the two countries also underlined and reinforced their commitments to international peace and security, and to develop the co-operation especially  in dealing with the ever present threat of terrorism, “we stressed the importance of needed to end the scourge of terrorism, and the threats to peace and sustainable development in Africa and the world”.

He said they both agreed to work closely within the United Nations Human Rights Council, as well as with other UN agencies, to promote the protection of human rights around the globe.

President Akufo-Addo said he and his Swiss counterpart discussed and agreed on the need for Ghana to become a member of the Human Rights Appeal Caucus.

Thus, Switzeralnd will support the candidature of Professor Henrietta Mensa-Bonsu, a distinguished Ghanaian jurist, for election to the International Criminal Court (ICC) during the elections, which would be held in the 16th Session of the Assembly of State Parties to the ICC from December 4 to December 14.

According to the President, he highlighted the importance Ghana and the African Union attached to the long, overdue process of UN Reform, especially of the Security Council, to correct the longstanding injustice that the current structure and composition of the UN Security Council represent for the nations of Africa.

He said Ghana also sought the agreement of Switzerland to support the lead role of the AU in its attempts to resolve the crises in Mali, Libya and other States of the Sahel, which were receiving the full brunt of the terrorism menace.

Whilst acknowledging that the issue of migration and mobility went beyond the individual policies of state, President Akufo-Addo said the two sides agreed on the need to provide the right environment on the continent, to prevent the high numbers young Africans taking harrowing risks across the Sahara and around the Mediterranean, trying to reach a better life.

“What this means is that, if we provide them the right environment in Africa, which enables them to enhance their skills, receive appropriate training, have access to digital technology and enhanced economic opportunities, their energies can be channelled towards making our continent great.

“Nonetheless, whilst the necessary measures are being put in place, Ghana and Switzerland, as concerned and responsible members of the international community, have decided to co-operate further in ensuring legal and safer means of migration,” he said.

The President said he discussed Ghana’s position as one of the Swiss Confederation’s State Secretariat for Economic Affairs (SECO) priority countries for economic development, for which the new Swiss co-operation strategy for Ghana that would be launched soon, would involve an amount of 80 million  Dollars to support the enhanced competitiveness of Ghanaian enterprises and the diversification the economy.

President Leuthard said Ghana was a reliable trade partner to Switzerland and expressed her country’s readiness to further deepen relations. She said her country had identified Ghana’s agricultural sector as a viable area of investment.

She announced a new Swiss co-operation strategy for Ghana which involved $ 80 million to support the enhanced competitiveness of Ghanaian enterprises and the diversification of the country’s economy.

Trade between both countries amounted to some two billion dollars last year, largely from the export of gold and cocoa to Switzerland, and the import of chemical and pharmaceutical products, as well as light machinery and military equipment from Switzerland.