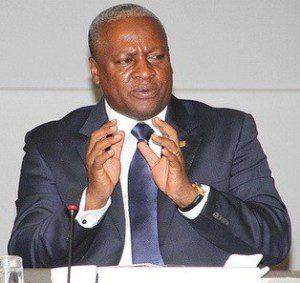 “The transformation is coming in the form of supporting Ghanaian indigenous industries to process raw materials into finished goods for export to attract more revenue than just exporting raw materials to other countries,” he said.

President Mahama said this when he delivered a lecture on :”Ghana’s Economic Transformation, Progress and challenges in policy implementation” at Chatham House in Central London as part of his four-day official visit to the United Kingdom.

President Mahama had earlier on delivered a paper on the economic investment prospects of Ghana and would later address the House of Commons All Africa Parliamentary Group and meet Black Solicitors Network at KPMG.

President Mahama said under the transformation policy, the government had supported selected pharmaceutical companies to produce drugs to reduce the importation of drugs.

He said the government had also released $50 million dollars to some poultry farmers under the broiler project and similar support had been given to the shoe factory in Kumasi to produce boots for security personnel and schools.

The President said the government would also resume the production of sugar to reduce the importation of the commodity by cutting a sod for the construction of a sugar production factory at Komenda in the Central Region.

President Mahama said a shea nuts processing factory had been completed in Buipe in the Northern Region and this would reduce the importation of shea products.

He said the support of indigenous Ghanaian companies in areas that the country had comparative advantage would help in the stabilization of the economy as the country would now export more finished products for foreign exchange than importation of products.

President Mahama said Ghana would be concluding negotiations with the International Monetary Fund next month and gave the assurance that the support would consolidate Ghana’s fiscal policy to make it the economic icon of the continent in the coming years.

He said:”I am optimistic that after all these transformations, it will boost our economy in the areas of energy, agriculture, industry and mining among other ventures.”