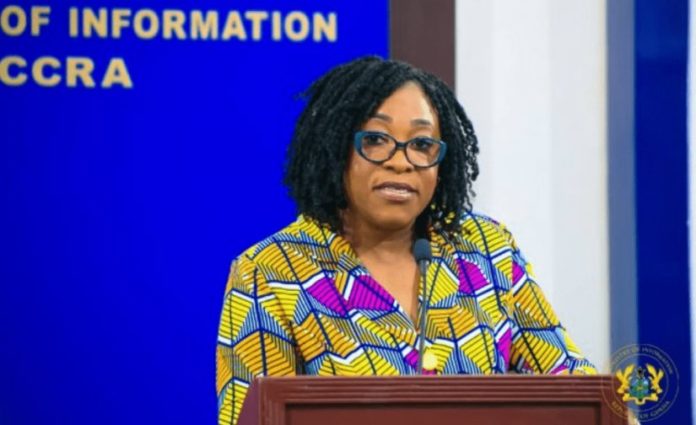 The Government of Ghana will ensure that the demolished Nigerian High Commission building in Accra is restored to its original state, as soon as possible, Madam Shirley Ayorkor Botchwey, Minister of Foreign Affairs and Regional Integration, has stated.

Speaking at a media briefing, on Wednesday, in Accra to give an update on the issue, Madam Ayorkor Botchwey said:“Let me state, emphatically, that the Government takes a serious view of the violation of the diplomatic premises.

“Whilst expressing deep regrets over the incident, I wish to assure the Government of the Federal Republic of Nigeria that the Government of Ghana will pursue this matter to its logical conclusion and ensure that the perpetrators are sanctioned in accordance with the laws of the land.”

The Minister, however, entreated the media to be circumspect in their reportage on the matter.

She said the relations between Ghana and Nigeria predated the independence of both countries and were bound by blood ties.

Over the years, these relations had been nurtured and had produced excellent cooperation manifested by the excellent relations between their current Presidents: President Nana Addo Dankwa Akufo-Addo and President Muhammadu Buhari, who had spoken on this matter.

She said Ghana remained a law-abiding country, which upheld the principles of the rule of law where due process was followed at all times.

She gave an account of the preliminary findings of investigations into the incident regarding the breach of the premises of the High Commission, located at 19/21 Julius Nyerere Street, Ringway Estates, East Ridge, Accra, on Friday, 19th June, at about 2300 hours.

She said a committee comprising officials of the Ministry of Foreign Affairs and Regional Integration, the Lands Commission, National Security Secretariat and the Ghana Police Service was constituted to investigate the incident and make appropriate recommendations.

The preliminary findings by the Committee indicated that the High Commission of Nigeria presented letter referenced SCR/LCS 74/VOL.2/95 dated 7th August, 2000, granting allocation and right of entry to the High Commission, a four-acre parcel of land in the Accra, Osu Mantse Layout.

She said the Commission presented the receipts of payments on the said land, made by Banker’s Draft payable to the Executive Secretary of the Lands Commission.

However, the Land Title Certificate had not been issued to the High Commission.

The Minister said in June 2019, the Osu Stool requested the Greater Accra Regional Lands Commission to grant a lease in respect of a part of the said land to a third party.

She said the Lands Commission stated that per its processes of granting leases, its records did not reveal any previous transaction in respect of the land in question.

Madam Ayorkor Botchwey said the Lands Commission revealed that a letter referenced AC 14826 of 4th July, 2019, signed by the Regional Lands Officer, and addressed to the High Commission of Nigeria, informed them that the Osu Stool had requested the Lands Commission to grant a lease on the land in question to a third party.

The Lands Commission, therefore, advised the High Commission of Nigeria to provide the relevant documents on the ownership of the land, but the former did not receive any response.

She said in view of the silence of the High Commission, the Lands Commission went ahead and issued a Land Title Certificate covering the said parcel of land to a third party.

The Minister said unfortunately because the High Commission did not obtain a lease following the allocation letter, or proceed to obtain a Land Title Certificate or even a building permit for the new property, a search by the Lands Commission did not show that any proper documentation had been obtained in respect of the property.

However, the Minister emphasised: “It is worth noting that Articles 22 and 30 of the Vienna Convention on Diplomatic Relations stipulate that the premises of the Mission as well as the private residence of a diplomatic agent shall be inviolable. Thus, the incident of Friday, 19th June, 2020 constitutes a breach of the Convention,” Madam Ayokor Botcwey said.

She said in light of the above, the Government of Ghana had decided the Lands Commission would issue a letter to the Osu Traditional Council stating that in August 2000, a formal offer was made to the High Commission of Nigeria in respect of the parcel of land in question; the offer was accepted by the High Commission and the payments made, accordingly, constituting a contract.

She said the Lands Commission would proceed to issue a Land Title Certificate to the High Commission of Nigeria to regularise its ownership of the property in question.

She said the Government would also take immediate steps to engage the Osu Stool and all stakeholders on the impasse.

Meanwhile, she noted that following the arrest of some persons connected to the breach of the premises, the Criminal Investigations Department would expedite action on investigations, given the delicate nature of the matter and its potential ramifications for bilateral relations.

The Minister said the High Commission would take the appropriate steps to obtain building permits for the construction; adding that in view of the above, the Government of Ghana would actively engage the Nigerian Government at the highest level to address the impasse and help calm tensions in both countries.

Madam Ayorkor Botchwey assured the Diplomatic Community in Ghana and the High Commission of Nigeria in particular, that the Government of Ghana would not relent on its primary obligation to protect and guarantee the safety of the Members of the Diplomatic Corps.

Following the demolition of an apartment block on the disputed land on Friday, the Osu Traditional Council issued a statement, saying the land belonged to Stool and the High Commission had encroached on it because it had not entered into any lease agreement with the Commission.