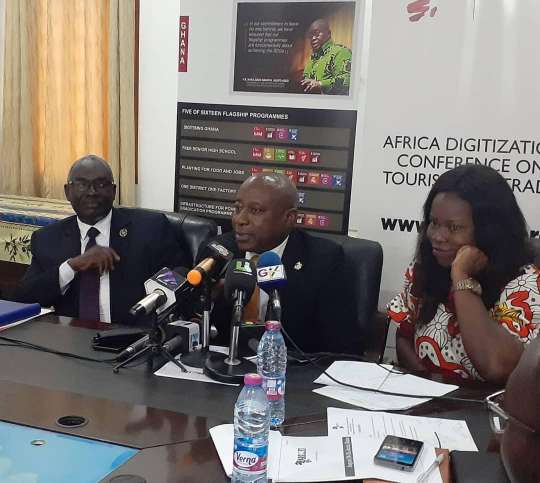 The Chamber of Tourism Industry (CTI) in collaboration with stakeholders in the sector will organise this year’s Africa Digitisation Conference on Tourism and Trade (ADCOTT) at the Accra International conference.

It has been slated for August 24 to 26, and it is expected to bring together over 2,000 participants to discuss public policy issues relating to tourism, trade and internet in Africa, and to exchange information on best practices.

“Pushing Africa’s Tourism and Trade Frontiers through Digitisation” is the theme chosen for the event.
Dr. Ziblim Barri Iddi, the Deputy Minister of Tourism, Arts and Culture, at its official launch in Accra, said government was making strong push towards digitisation to help build a knowledge-based economy for development.

He commended the organizers and said the country’s tourism sector was contributing significantly to the growth of the economy through trade and investment.

Dr Iddi indicated that the success of the “Year of Return” had boosted trade and investment in the country, hence the need for government to introduce ‘’Beyond the Return” to sustain the initiative.

The Year of Return, Ghana 2019 was an initiative of the government to encourage African diasporans to come to Africa, specifically Ghana to settle and invest in the continent.

The project was also aimed at making Ghana the focus of activities to commemorate the landing of the first enslaved Africans in the English colonies in North America and to offer the opportunity to entrench Ghana’s leadership.

The Deputy Minister underlined the government’s unswerving determination to leverage on technology and digitisation, to strengthen and improve service delivery by the public sector.

This, according to him, has resulted in the migration of some public institutions including the Ports, Lands Commission, Ministry of Tourism and the Passport Office onto the various digital platforms to ease business transactions.

The transformation has brought efficiency in service delivery and massive improvement in revenue mobilization.
Dr Iddi said over the years, the country had relied on gold and natural resources for its development, something the government was eager to change – diversify the economy through the development of tourism and agriculture.

“Government has prioritised tourism because of its benefit of creating employment through the value chain. We will continue to sustain the sector and use it as a tool to drive trade and investment,” he said.

Government would be spending over the next four years, budgeted about US$100 million to strengthen the tourism enabling environment, develop tourist sites and support tourism enterprises.

Dr Kodjo Esseim Mensah-Abrampah, the Director General, National Development Planning Commission, commended government for investing in the tourism sector as it gained prominence as a conduit for achieving sustainable growth and poverty reduction.

He said by 2027, Ghana would want to realise 8 million tourist arrivals per year and rake in US$8.3 million a year for the industry and that was why initiatives such as ADCOTT were worth supporting because of the long-term goals of the sector.

The National Annual Progress report shows that tourism arrivals and receipts are growing steadily and contributing immensely to the Gross Domestic Product in the service sector.

Mrs Odelia Ntiamoah, the Chief Executive Officer, CTI said one of the major setbacks for intra-African export was Africa’s borders, adding that, technology was the solution to the problem in addition to the introduction of the continental free trade.

She said their expectation was that at the end of the conference, there would be a working document to help shape the country’s tourism and trade sector for improvement.