Addressing the media in Bolgatanga on Thursday , the Regional Director of the Environmental Protection Agency (EPA) who is also the National Focal Person in Ghana for the United Nations Convention to Combat Desertification (UNCCD), Mr Asher Nkegbe , stated that all is set for this year’s World Desertification and Drought Day to marked in the Region.

He announced that the occasion which is on the theme, ” the theme, “Inclusive Cooperation for Achieving Land Degradation Neutrality” and already started with some activities , would be climaxed with a durbar in the Bongo District.

Outlining some of the activities earmarked for the occasion, Mr Nkegbe , mentioned that about 20,000 people including the staff of theRegional Coordinating Council (RCC) , the District Assemblies, the Regional Environmental Management Committee, Traditional and Religious leaders, local NGO’s, opinion leaders and the media would be engaged to take actions to restore and rehabilitate degraded land with the ultimate aim of contributing towards achieving the overall goal of sustainable development.

“The Agency together with the Ministry of Food and Agricultural (MOFA) and other stakeholders will introduce various Sustainable Land and Water Management(SLWM)interventions in degraded communities in the region particularly Kunkua , a community within the catchment area of the Vea Irrigation Dam to restore 2000ha of degraded lands. Communities will also be empowered and encouraged to undertake enrichment planting of four thousand seedlings including vetiver grasses within the buffer zones of the Vea Irrigation Dam. This will restore degraded areas within the riparian vegetation of the Vea Irrigation dam and conserve water in the Vea dam for domestic use in the Bolgatanga Municipality and Bongo District. The total land area targeted for the enrichment planting is 37.7 ha.” the Regional Director stated.

Mr Nkegbe stated that the Agency would also sign up to the restoration of forty (40) ha degraded farm lands at Zabogu, Kuka-yakin and Kpalwega in the Bawku Municipality through sustainable land and water management techniques.

He indicated that his outfit would also empower some selected schools and communities in the region to transplant 10,000 tree seedlings in their areas to help restore the vegetation cover.

The Regional Director who commended the Paramount Chief of the Bongo Traditional area, Naba Baba Salifu Aleemyarum , for initiating the Green Bongo project to help fight desertification , also called on other chiefs in the area to emulate him.

The EPA in collaboration with MOFA as part of the day had empowered some farmers in the region to adopt earth bonding and stone bonding on their farm for this year’s farming season as demonstration farms.

Mr Robert Baba Atinga who took the farmers in Kunkua , one of the communities on the technology schooled the farmers that apart from the earth bonding and stone bonding technology preventing erosion , the technology has the greatest potentials of conserving water and soil nutrients for their crops. 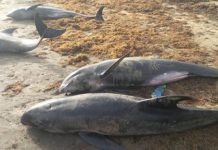