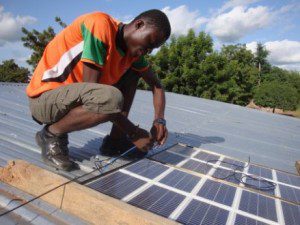 The Ministry of Power is collaborating with some real estate agencies and the Ministry of Works and Housing to incorporate solar installations in various building projects.

The move, according to the Communications Consultant at the Energy Ministry, Edward Bawa, forms part of measures to end the worsening energy crisis in the country.

Some major stakeholders in the energy industry have suggested that government  provides households with solar panels to help end the energy crisis Ghana is battling with.They are of the view that the current crisis can partly be attributed to government?s inability to explore innovative ways of solving the crisis.Speaking on Citi FM?s news analysis programme, The Big Issue, Bawa said government has resolved to adopt the solar panel policy to provide alternative source of energy for Ghanaians.

?I do know that the Ministry of Power is collaborating with real estate agencies and the Ministry of Works and Housing to see how as part of the building acrichitecture , we could incorporate solar installation,? he stated.

Bawa argued that the policy will be feasible and affordable, saying, ?if someone for example can afford to buy a house for a million Ghana cedis, a few more thousands to guarantee solar energy in that particular property will not be something that will deter people.?

He noted that government had already started implementing the policy in some regions in the country, adding that, government had installed over 2,000 solar panels in those areas.

?What we have done over the period since 2009 has been to go ? to particularly the  inland communities and some communities in the North and provide solar installations for clinics, for schools etc.?

The Minister of Power, Kwabena Donkor earlier revealed that government will secure emergency power barges to rectify the challenge.

Asked whether government had initiated moves to secure those barges, Bawa stated that, ?we [government]are still working on most of the details that will bring these barges?there are different groups who are working on different aspects of the project and hopefully we should be able to bring them in time to alleviate the situation.?