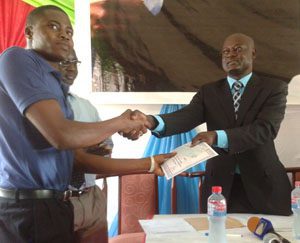 John Awuni (right), presenting a cheque and certificate to one of the awardees

According to him, the country will become self-reliant and subsequently reduce the importation of such commodities if more attention was paid to the agriculture sector.

Awuni, who was speaking at the induction ceremony of five Finatrade Foundation Scholars at the University of Ghana College of Agriculture and Consumer Sciences, said ?until adequate structures are put in place, Ghanaians would continue paying lip-service to the sector that has over the years remained the backbone of the country.?

He said no country in the world could stop or reduce the importation of foodstuffs and other food crops without investing in agriculture, stating that ?if government would have to succeed in its pursuit to reduce the importation of rice, tomatoes, oil and sugar, then appropriate infrastructure would have to be put in place to leverage on the country?s comparative advantage.?

Awuni expressed his outfits? commitment to supporting the growth of the agricultural sector, saying, ?We will continue to partner government and private individuals to help grow the sector.?

Since 2004, Finatrade Foundation, the Corporate Social Responsibility wing of the Finatrade Group, has offered scholarships to a total of 203 brilliant but needy agricultural students in five state-owned Universities of the country.

It has also supported graduate students who pursued agriculture and various universities to set up model farms, and helped to set up ICT centres.

The annual scholarship of GH?700 per student has also been increased to GH?800, bringing the total amount spent in the scheme since its inception to GH?2 million.

He said the demand for jobs had become competitive and called on graduates to establish their enterprises.

Professor John Ofosu Anim, Dean of the College of Agriculture and Consumer Sciences, commended Finatrade Foundation for their support, urging the students to take advantage of the situation to develop themselves.